Review: Wait Until Dark by Way Off Broadway Community Players
by Michael Meigs

Community theatre folks are glad that you came, and they make no pretense about that.  They've worked for weeks, mostly after hours and on weekends, in an undertaking that doesn't pay the grocery bills or even the transportation expenses.  I'm always touched and honored when players and staff position themselves to greet audience members as they come out of the theatre.

Over decades of diplomatic assignments I regularly shook hands of officials receiving guests at the entrances of embassies for national day celebrations.  Here in Austin in contrast, particularly on the periphery, your artist hosts greet you at the end, sending you home with good wishes. They've shed their imaginary world and discarded fictitious characters, so you can commune briefly with them as part of the community of the theatre.

There was no particular protocol in the line after Wait Until Dark.  Stephanie Newton, fresh off stage from her appearance as a police officer in the final scene, was the first who shook my hand.  My friend Stephen Reynolds, cast as the mostly absent photographer husband of the blind protagonist Susy Hendrix, joked that every night  between his scene in Act I and his last-second appearance in Act II he had time to read a novel.  For opening night, to top it all, the company observed its tradition of inviting audience members to linger with them around a long table laden with good things to eat.

Wait Until Dark is a perennial. Frederick Knott had already written the successful Dial M for Murder (1952) as well as the script for Alfred Hitchcock's movie.  In 1966 his Wait Until Dark with Lee Remick was a huge success, made into an even more successful film starring Audrey Hepburn and Alan Arkin.  Knott never wrote another play, but the royalties from regular productions of those two playscripts provided him a income sufficient to live a comfortable social life in New York City until his death in 2002.

The "dark" in Wait Until Dark  is the dark of evil -- crooks and conspiracy and murder -- and the dark of blindness -- protagonist Suzy Hendrix, in her thirties, is only recently blind due to some unspecified accident -- and the dark of the thriller climax in which Suzy does battle in the literal blackness of the stage while a tense audience, suddenly lightless, wonders what the hell is going on. 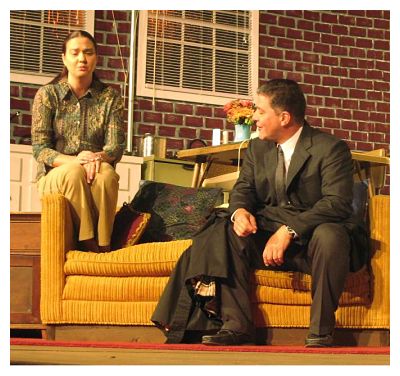 Unlike Susy, the audience is enlightened from the very first scene, in which a couple of ex-cons meet in a New York basement apartment, summoned by telephone by a stranger making a peremptory promise of a big payoff.  Ed Trujillo is Mike Talman, a mild mannered con artist; Howard Genry is the disgraced ex-cop Carlino.  The inhabitants of the apartment are out for the evening, and Harry Roat,  played by Daryl Miller, arrives to entice and then threaten them with the task of locating a doll.  That's the McGuffin, in Hitchcock parlance, the object that motivates all the action.  It's stuffed with heroin, was confided to unsuspecting photographer Hendrix in Canada, and has gone missing.  We learn pretty quickly that Roat has already murdered one person in his futile attempt to recover the doll.  The bad guys play elaborate ruses to get the husband out of the way and to entice the apparently helpless Susy to reveal its whereabouts.

Karen Miller as the blinded Susy shows plenty of pluck, and she was so consistent in her portrayal of that handicap that at the intermission I heard the woman behind me urgently asking her friend if the actress really was blind.  As a plot device, her blindness offers several opportunities to crank up the suspense -- bad guys are standing silent in the apartment when she comes in, and she intuits that someone may be, no, must be there, although she thinks it's the bratty kid Gloria from next door.  But did I miss dialogue early in the piece in which bad guy Roat informed his reluctant henchmen of Suzy's condition?  Trujillo as Talman concealed himself behind the door when Suzy arrived home solo, but that big lunk Carlino just froze behind the hat stand, which wouldn't have shielded him for a minute if Suzy had been sighted. 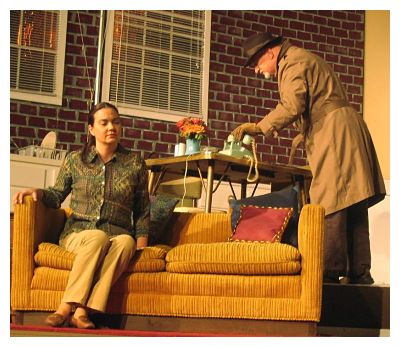 Carlino's worry is that he has left fingerprints in the apartment.  His obsessive wiping down of the surfaces captures Susy's attention.  That tic is continued throughout his numerous visits, even after the unseen corpse has been disposed of, theoretically removing his cause for concern.

Talman calls on Suzy and passes himself off as a friend of her husband, then the bad guys carry out a masquerade that seeks to dupe her into thinking that her husband is having an affair and might be a murderer.  It's a bizarrely elaborate plot, and one might be permitted to wonder why Roat didn't simply beat the hell out of Suzy the way that he did with the unfortunate expeditor of the doll.  If you can swallow their game --  given our sympathy for Suzy and Trujillo's affable portrayal of con artist Talman, you probably can -- then you can concentrate on the gradual dawning of Suzy's suspicion and the clever series of tactics she uses, leading up to the nerve-wracking denouement in the dark. 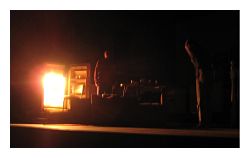 Daryl Miller as wicked Harry Roat is supposed to have an accent of some sort, perhaps Irish, given the syntax of his lines.  He was appropriately taciturn but initially not so steely as to have credibly intimidated the ex-cons.  His subsequent masquerades as old man Roat and as distressed son Roat, were far more plausible.  He was so threatening in the closing scene that we were all glad to see -- or, rather, hear -- Suzy surprising him and reducing him to a writhing, determined menace, dragging himself relentlessly forward on his elbows, lit only by the glare of the light from the refrigerator.

Kathryn Reck as young Gloria was convincing both in her pique and then in her excitement about assisting Susy with the mystery of the bad guys.  In some brief passages of dialogue she stood with her back to the audience while speaking to Susy, with parts of some lines lost to us.  She's a charmer and entirely at home on stage.

The opening night audience was enthusiastic. I did have a woman seated somewhere behind me who probably had the habit of talking to her television at home, but others were kind enough to shush her into mostly silent attention to the action on stage.

Thanks again to director Christen Bumpus and the company for the evening and for an ambitious season in their new venue!

Click to view program for Wait Until Dark by the Way Off Broadway Community Players, Leander 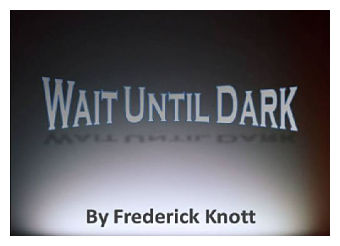