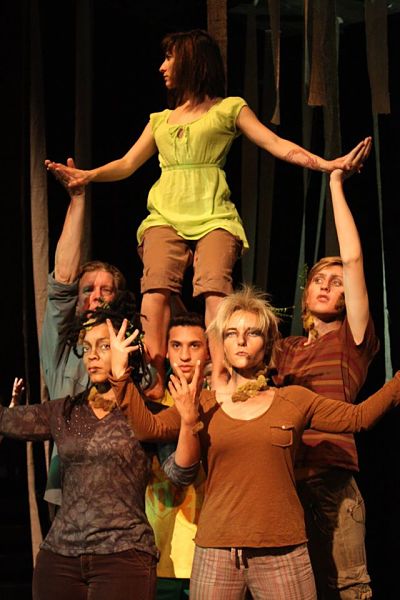 The ambitious Austin-grown theatre show The Tree Play is just finishing up its premiere run at the new Ground Floor Theatre on the east side. It's a new work in the form of a stage ritual and composite documentary on rain forest and habitat destruction around the world. Robi Polgar authored the script that ties the diverse elements together in a clear narrative thread. The play is an artful continuation of consciousness raising in Austin and the world.

The connective threads of this work are of the greatest interest in looking at the play. The ritual started with the cast walking out of the theatre into the lobby. They opened a long rope and began to extend it; they made verbal forest sounds, bird calls and other, while gesturing to the assembled audience to grasp the rope. Thus led into the playing space, the audience came to rest in a large circle around a forest giant portrayed initially by three actor/dancers.

Several essential sections of the performance are dance, choreographed by Austin National Treasure Toni Bravo. Much of the dance was by and in the giant tree, which although rooted showed much articulation and expressiveness in leafy movement. Until they enacted their parts of the plotted story, the rest of the cast stood in the audience verbalizing the forest. All around, fabrics hung to the floor from the 20-foot Ground Floor Theatre ceiling, abstractly conveying hanging vines and trunks rising into the misty darkness of the upper canopy. This vision is one of set designer Ia Enstera’s last in Austin, realized before her recent departure for graduate studies in Finland. 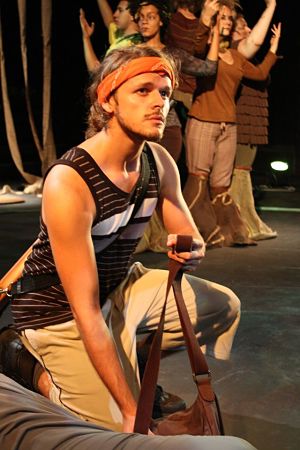 The story gave us charcoal burners, tree-cutters, environmentalist writers, and a young girl who formed a deep connection with a tree. The modern story of forest and habitat destruction was told from the dual viewpoint of girl and tree. The Tree Play is a blend of magical realism and pure magicalism, and it is strongly reminiscent of the work of Jorge Luis Borges.  At a down-to-forest-floor level, the story of worldwide habitat destruction needs to be told until we all make effective changes.

Theatre’s forays into social and cultural critique are at their best when they show, as in The Tree Play, rather than merely tell. Such committed showing is a tradition in Austin theatre. The Tree Play upholds the tradition and resembles “Gypsy Chain” by The Dirigo Group, produced in the late 90s or early aughts. That story was far more narrative, set in the Pacific Northwest.  It told the true-life story of an EarthFirst! activist named David “Gypsy” Chain who died under a felled forest giant while trying to stop logging of Old Growth redwoods. The story concerned his murder, although some saw it as sacrificial suicide.

That work and The Tree Play are eerily similar in their stage craft and subject matter. Their separation in time by perhaps a decade and a half is both heartening in that environmental consciousness continues to rise and disheartening in that more solutions for habitat destruction have not materialized in the interim. We can, for now, encourage more skilled and enjoyable efforts such as The Tree Play. 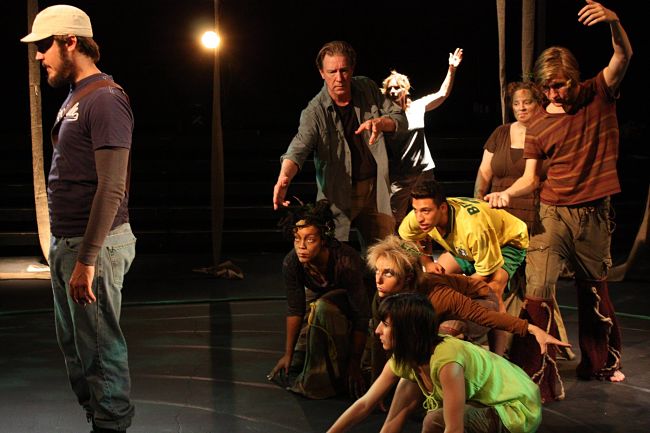 The Tree Play runs approximately 45 minutes (no intermission).
Please bring a pillow or blanket to sit on.
Some chairs will be available for patrons who request them. 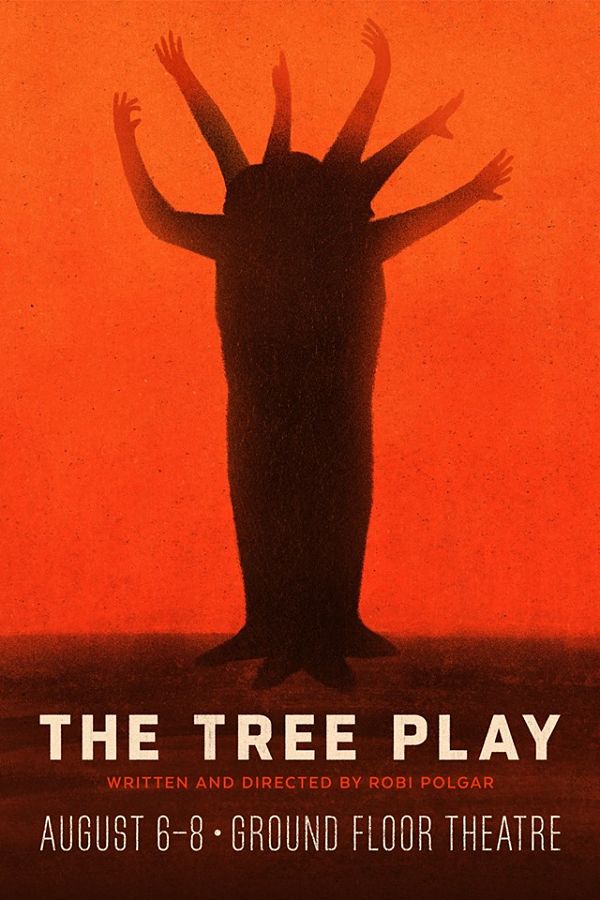