Tilt Performance Group’s production of The Flip Side, an evening of short playlets commissioned for the show, is playing now through June 5th at Ground Floor Theatre (GFT) on the east side.  The show is a co-production of Tilt Performance Group and Ground Floor Theatre.  Tilt is a company formed of differently abled young artists with various physical and developmental challenges who have banded together to find ways to perform after high school. In the academy they had accommodation and opportunities to perform; after graduation they encountered in the larger society almost no accommodation for performances by them. Ground Floor Theatre has a mission to support performance by underserved and underrepresented communities, so it’s a natural for Tilt Performance Group and GFT to join forces.  The beneficiaries of this alliance are the audiences who attend this show.

The Flip Side is a commissioned work of six one-act playlets. Tilt’s call for plays gained more than one hundred submissions.The only thematic restriction was that they had to deal with the flip side of life, the side the differently abled inhabit every day.  Here was red meat for the performing artists of Tilt.

We saw in The Flip Side a diverse and unusual take on the world. The updating of the myth of Pygmalion and Galatea, “Lisa and Peter,” showed touchingly why some myths just don’t work in the modern world. “The Interview” proved amply how the human resources department has already turned robotic, and also how HR is such an iceberg of negation for the differently abled.“Transformation Assignment” gave us the flip side take on the Cinderella fairy tale—from the perspective of the mice who assisted with Cinderella’s pumpkin coach on the way to the Royal Ball. Hint: the Fairy Godmother got it all wrong.

Anything to be said about “Nephrology” is one big spoiler. It suffices that anyone with problems of failure and rejection should try being a kidney sometime.“The Green is Always Greener on the Greener Side” is a parody of Beckett’s Waiting for Godot.  The playlet has fun with what has been called the most important play of the 20th century, and it offers its own ode to joy in response to Godot’s darkness.  “Break Dreams” is perhaps the most literal statement of the flip side of life. The story describes freedom and fantasy out at the waste bins behind the convenience store.The playlet has wit, whimsy, and engaging performances, in keeping with the other quality artworks in this show. 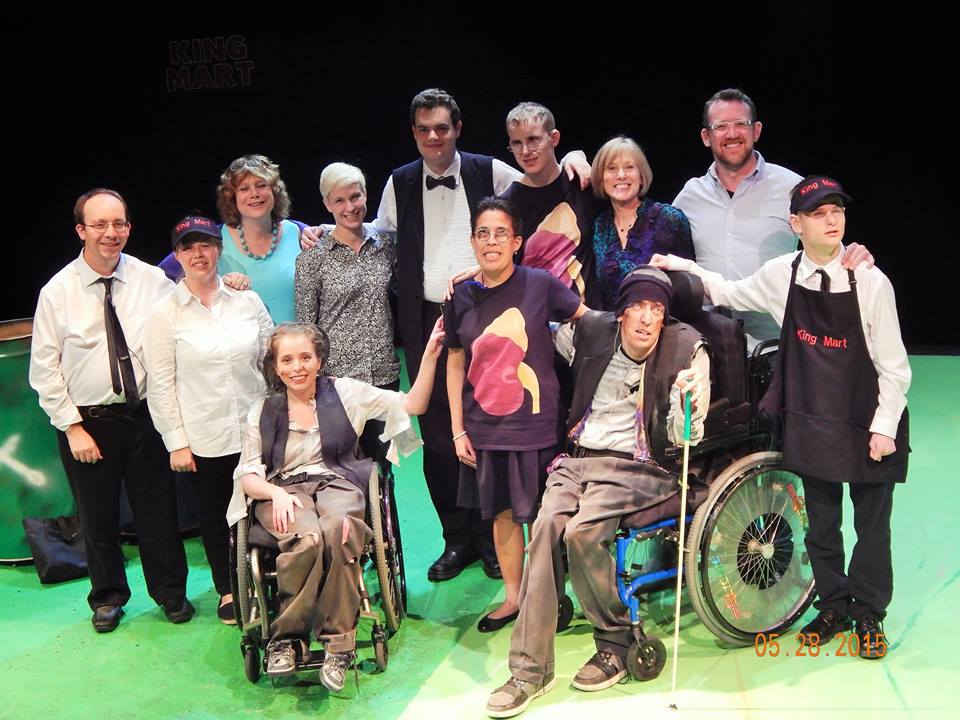 Every performer in The Flip Side is distinguished by his or her commitment to art and to Tilt. Every audience member who has ever performed on stage has a meltdown of feeling seeing these young artists showing the courage, the willingness to be seen, of setting foot on stage and creating their own piece of performance art.

Most of the obstacles life has thrown at them are behind them, surmounted by treatment, care, accommodation, and determination.  The fact that these young people have chosen theatre passionately and are now showing their chops on the boards means they have crossed a Rubicon of sorts. Ahead lies the mighty Rome of theatre, for victory or defeat.The only certainty is that there is no turning back. The Flip Side assures us that we’ll see this auspicious group of actors again and again, hasten the day.

The Flip Side, by Tilt Performance Group, directed by Adam Roberts and curated by Gail Dalrymple, Adam Roberts, and Lisa Scheps plays at the Ground Floor Theatre, 929 Springdale Road, until Friday June 5, 2015.

The Flip Side, short plays
by various
TILT Performance Group