Here's the premise: since Pablo Picasso used to hang out at a bar-café in Paris called "The Nimble Rabbit," just suppose that one morning in 1904 Albert Einstein happened to meet him there. Einstein was a poorly paid patent examiner but by night he was working on his "Special Theory of Relativity." Two of the formative geniuses of the 20th century!! Art and Science, just about to flourish, ignorant of what awaited them! What a great concept! 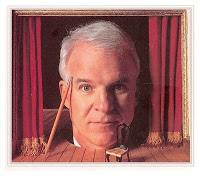 Lots of zany humor here, verbal and conceptual paradox, anachronism gone amok -- we are loose in Steve Martin's head. John Gall, designing the cover for the paperback edition of the play, caught this precisely.

Martin delights in his unseen role in this play. From the opening scenes he plays mischievous tricks on the audience and the characters, breaking the stage illusion and bending time and space to suit his funnybone. Getting an astounded and delighted laugh from the audience for that bit of business, Martin secures their consent for some serene irrealities and not-possible meditations on genius and fame. This play is done in one act, quite possibly because any audience pauses for reflection might break that spell.

Bar-café owner Freddy (Grant Kail) and his waitress/main squeeze Germaine (Amy Lewis) are simple, hard-working folk, the tolerant hosts of a floating crowd of regulars such as the bibulous Gaston (Paul Arndt). 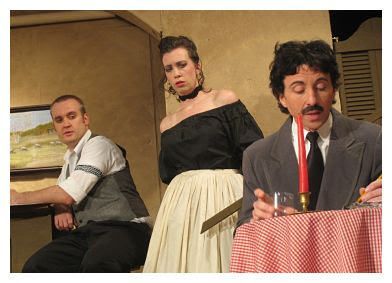 Into their premises that morning comes an unexpected eccentric, the young patent examiner Albert Einstein. Quite apart from Martin's initial prank about getting Einstein into the bar twice in looped space-time, Freddy and Germaine don't quite know what to make of the young man. Einstein says that he's waiting for the Countess, who has a rendez-vous with him in another establishment but since she's just as eccentric as he is, she's certain to go somewhere else, so why not here? That's the Martinesque nutty logic that bounces throughout this piece.

Enter Ellie Vixie, clad in brilliant red and wrapped in dreams of Pablo Picasso. In giddy transport she insists on telling the whole story of their impetuous, wild encounter, in anticipation of meeting him once more here at the Lapin Agile. She waves a penciled sketch on a napkin given her by the artist after their encounter.

The twentieth century! It's already 1904, and bar-owner Freddy can never quite get the date right, but playwright Martin sets his characters into contemplation of events to come. Here's some of his most divine nonsense, genuinely funny despite his wink-wink unseen presence behind the text. First Germaine the waitress and then Freddy make predictions. They are outrageously wrong ("Led by Germany, this will be known as the century of peace").  In fact, the predictions are so absurd that the piece would be better served if the actors slowed the pace here a bit, letting brain-cogs churn as they produce progressively more erroneous pronouncements. 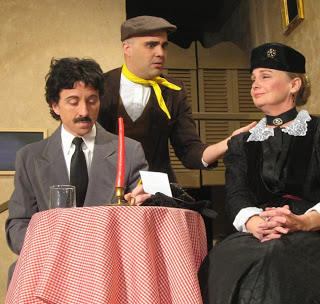 There's a lot of quizzically witty talk about art, including a thorough analysis of the merits of the inherited tableau of sheep in a field that is hanging behind the bar. Martin brings on a self-seeking would-be genius Schmendimann (Robert Sherman), who generally baffles everyone before disappearing. 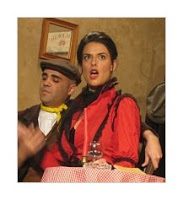 When Picasso finally notices the lady in red, he goes after her like a bull in heat. To her dismay, he appears to have completely forgotten their first encounter. Sadek as Picasso adroitly re-seduces her with everyone looking on before he and Einstein get into chipper dialogue about genius that yields both nonsense and profundities.


And how do you resolve the plot with incongruities popping like popcorn? Martin doesn't need a magic wand. With a puff of mystery, he brings on an unnamed Visitor from the future in blue suede shoes (enter upstage, from toilets). The affable, aw-shucks Visitor declines the offer of alcohol. 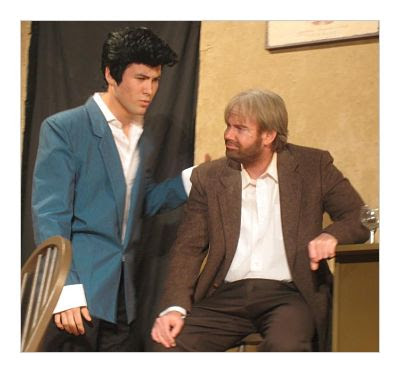 He listens to the zippy dialogue; he finds everyone to be "really nice folks" and buddies briefly with alcoholic Gaston. Stephen Hendrix in this role provides a nice visual contrast with our turn-of-the-other-century friends. His lines, as words from the future, should cinch up the conclusion, but he plays them so low-key that other characters run over them. 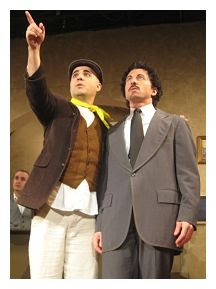 For the finale, the ceiling lifts away to reveal unimaginable constellations, and our geniuses read their names in the stars.

Director Christina Gardner and her cast have successfully pulled off a very challenging theatre piece, once again emphasizing both the reach and the grasp of the Sam Bass Community Theatre. They've taken on Steve Martin's over-clever wit, mastered it, and made it very entertaining.

Grant Kail as the practical Freddy, surrounded by geniuses, rises neatly to the occasion with the play's tag lines: ". . . in the twentieth century, no political movement will be as glorious as the movement of the line across the paper (points to Picasso), the note across the staff (indicates the Visitor), or the idea across the mind (indicates Einstein).

Most of all, Ben Weaver sparkles in his role as Albert Einstein. Contained, naive and sincere, he has a Charlie Chaplin purity to him, a wholesome antidote to Martin's manic plotting. 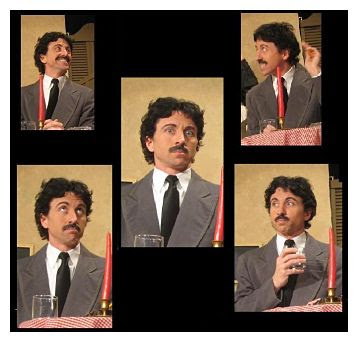 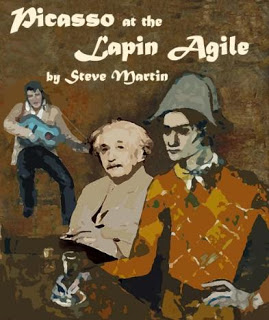