Review: Messenger No. 4 by Cambiare Productions
by Michael Meigs 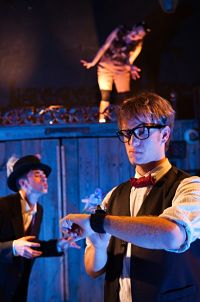 And here's the other fraternal twin of the Paper Moon Rep/Cambiare collaboration. ALT always regrets writing 'after the fact' pieces. There's something laudable about setting things down for the historical record, but a theatre friend used regularly to disparage such essays as 'useless reviews.'

Perhaps less so in this case. These compatible personalities and theatre companies carried out a new and successful strategy of production.  At a time when others are talking about cooperation -- such as the nascent scenery co-op that's under study and partly underwritten by the generosity of the MetLife Foundation -- they teamed up for some of their fundraising and they shared a venue, an ingenious set by Ia Enstera, and a performance calendar. Paper Moon took the first shift; Cambiare hit the boards afterward, about 9 p.m.

Each piece played without interruption. There was a pause of 15 minutes or so for resetting the scene. Not everyone was able to attend the full double-header. Will Hollis Snider's jaunty Messenger No. 4 ran until almost 11 p.m. I, for one, was a bit punch drunk by the end of Messenger -- so much so that I managed to lose the program sheets for both of the performances.

Rachel's Phineas was a carnival of caring while Will's script for Messenger No. 4 was a scrappy, all-boy imaginng. He  pulled apart dramatic conventions with happy audacity, rewriting Greek tragedies with a 21st-century satirical corporate spin. This Monty Pythonesque deconstruction of dramatic art had a good dose of Robert Zemeckis' Back to the Future -- and in fact of much of the extensive sci-fi literature about the risks of time travel.

Messenger No. 4 (Andrew Rogers) bears no name; in the corporate corridors of dramatic delivery he receives his assignments by instant messaging. His job is to turn up on cue in the great dramas and to narrate to Orestes, Clytemnestra, Agamemnon, Iphigenia, Antigone and all that crowd the crucial details of action that by ancient dramatic convention occurred offstage. He's a lanky, cheerful  fellow who'd probably be just as comfortable astride a messenger bike in New York City. It quickly becomes pretty clear that there's not much future for him in corporate dramaturgy. His short attention span is one factor; another is his indifference to the rules ("tell, don't show; never carry the script with you!"). 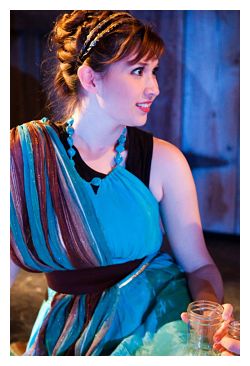 Snider has a lot of fun exploring the myth-changing potential of such indiscipline. The classics suddenly get new outcomes as famous tragic endings are thwarted. No. 4 becomes infatuated with Chrystothemis, the least of Agamemnon's daughters, and finds himself the proximate cause of a completely new tragedy in which she flings herself from a cliff, desperate for love.  Vanessa Marroquin is cute as a button in that role.

No. 4's corporate buddy 'Fifteen' (Philip Olson) does his best to shield and redeem our cocky young swain, but things take turns that bring Euripides (Daniel Sawtelle), the crew of A Midsummer Night's Dream, and Shakespeare in person all down on the boy (who by now has gotten a name of his own: "Andrew Rogers"). 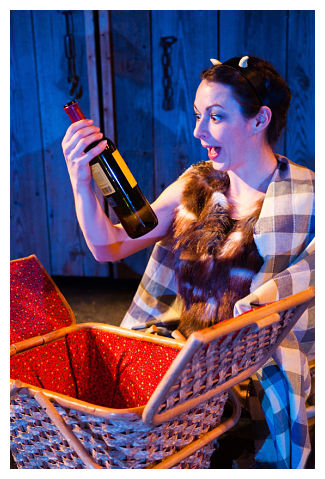 It's high spirited foolery, and you can almost hear Snider exclaiming, "Yeah, and wouldn't it be neat if -- ??" There are plenty of funny but extraneous bits: that security detail of trench-coated babes in sunglasses, for one example; all the Shakespeare business, for another, even though Rachel Wiese was a gem in her largely silent miming of Puck and in fact played Shakespeare, as well.

On its website Cambiare accurately comments, "This cast of ten goes to the mat every night in a grueling sprint, portraying upwards of 50 characters (animate and in- )." I had the impression that with some cutting and tightening, Messenger No. 4 would have been a more satisfying story.

Special credit goes to both companies for their ingenious marketing and fundraising for this joint bill via their "Dark Monday" fundraiser last November 28. That evening lured theatre friends out to play at the Blue Theatre with games, eats, an inflatable boxing ring, and even a critic-for-hire "Red Badge of Encourage" desk where Elizabeth Cobbe and I wrote fantasy reviews to measure. Travis Bedard's videos for the Cambiare Kickstarter campaign had just the right touch of cool comic irony for the company's target audience.  The Paper Moon campaign for "The 21 Would-Be Credit Card Bills of Phineas Hamm" via IndieGoGo has a lower profile and more modest goal but offers some of the glorious props and tatty/sexy costumes from the show.

Review by Jillian Owens for the Austin Chronicle, March 1

Click to view the program sheet for Cambiare's Messenger No. 4 (or How to Survive a Greek Tragedy) by Will Hollis Snider

Messenger No. 4
by Will Hollis Snider
Cambiare Productions 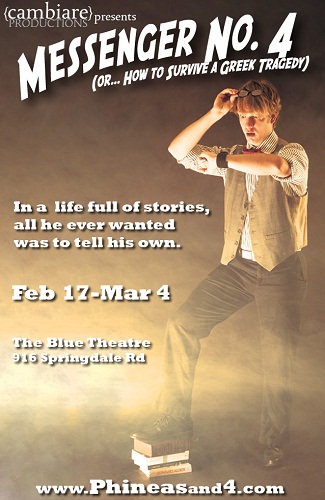 Cambiare Productions is an independent theatre company in Austin, Texas.

We strive to be a laboratory, refining ...