Review: Joseph and the Amazing Technicolor Dreamcoat by Woodlawn Theatre
by Kurt Gardner

Though it was written first, Andrew Lloyd Webber and Tim Rice’s Joseph and the Amazing Technicolor Dreamcoat was initially promoted in America as the follow-up to their 1969 hit Jesus Christ Superstar. Since then it has become a staple for theater companies around the world. It certainly shows the composer-lyricist team in a decidedly playful mood.

Like Superstar, Joseph’s story is based on the Bible, and they have some approaches in common. Both are rock operas without spoken dialogue, and both feature songs that incorporate different musical styles.

The shows part ways, however, when it comes to content. Although Joseph is sold into slavery by his jealous brothers and imprisoned, his story is nevertheless far cheerier than that of Superstar, making this a bright, family-friendly entertainment.

The Woodlawn Theatre production, directed by William McCray and Michelle Pietri, emphasizes the fun to be had in the music itself, supported by an appealingly retro look, including some delightful animated projections by Benjamin Farrar and characters clad in tie-dyed t-shirts.

Travis Eades is excellent as the title character, the favorite son of Jacob (a gleefully pantomiming James Frazier). Also outstanding are Dorianna James, Kate Ragan, and Samantha Vasquez as the narrators. Trey Headley is a comic highlight as the Elvis-impersonating Pharaoh, and the ensemble is exuberant and well-choreographed by Pietri.

Benjamin Grabill’s multi-level set design carries out the playful theme, and the hard-working Pietri also provides the colorful costuming, which includes an enormous Technicolor Dreamcoat for the big finish. Darrin Newhardt’s orchestra is rich and full, and the technical work, including Matt Smith’s lighting and Farrar’s sound, are spot-on.

Joseph features some memorable numbers, including “Any Dream Will Do,” “Go, Go, Go, Joseph,” “Benjamin Calypso,” and the dramatic ballad “Close Every Door,” which Eades absolutely nails. All told, this fine production is recommended family fun for the holiday season.

Joseph and the Amazing Technicolor Dreamcoat plays Fridays and Saturdays at 7:30 p.m. and Sundays at 3:00 p.m. at the Woodlawn Theatre, 1920 Fredericksburg Road, through December 23. There are additional special shows on  Wednesday, December 21, and Thursday, December 22 at 7:30 p.m. Tickets can be obtained online or by calling (210) 267-8388. 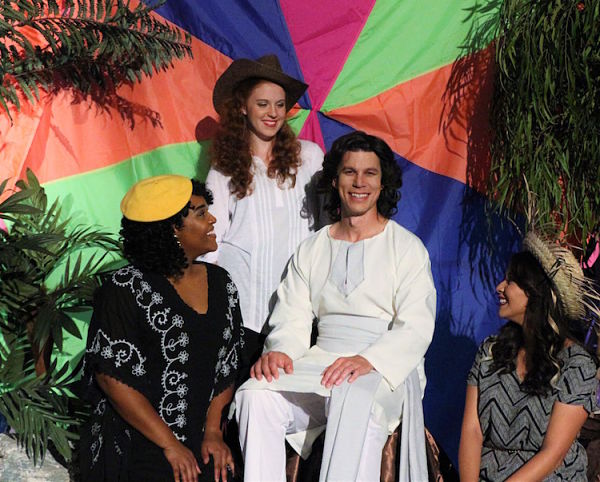 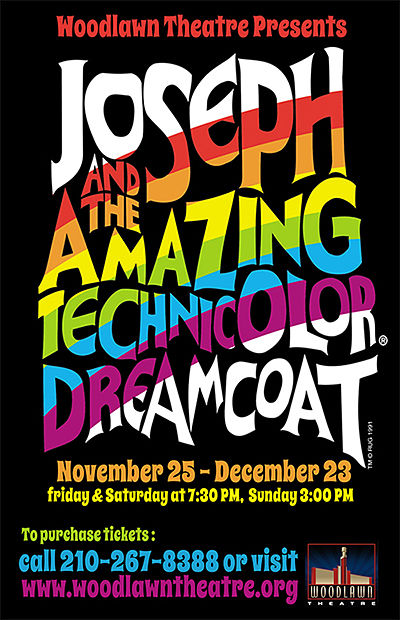