The dusty stage at the Salvage Vanguard is dressed in black and so is Mina Samuels.  The rear backdrop quivers, and Samuels emerges from beneath it, crawling -- squirming forward, really, because she's on her belly, embracing the grimy floor and working her way forward as if she were on a live fire range at army boot camp.

Keep your head down is the implied message.  She works her way around a couple of wooden posts bound with sagging crime scene tape, and she progresses in a wide curve, sweeping through that grime.  In all that dark and dust she's a suprising spot of color, red-haired and blue-eyed, fair as a bonnie Irish lassie.  When she rises, tentatively, brushing at her clothing and tucking that black shirt back into her black jeans, not for the last time this evening, we catch her wary, peering gaze. 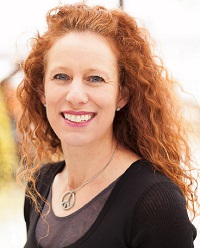 Some of us are list makers; some are storytellers.  Samuels clutches a clipboard, searches it, and in short phrases recites dangers lurking out there both in outer and inner darkness.  She articulates her concerns in bursts, four, five or six at a time, like compact compositions in free verse, and then gives us time to absorb them.  Between those bouts of tentative exorcism she explodes into manic activity.

Mina provokes very few of us to laugh out loud.  This is cerebral comedy that challenges the audience to connect the dots, to absorb those fears, and over the course of the performance both to ponder the persona being presented and the society that creates and sometimes even nourishes these neuroses and this existential dread (e.g., "saggy underwear" - "meteors" - "bad breath" - "the end of the world").

In rigorous obsessive-compulsive methodology she finishes her lists, checks them twice, nods to us.  She's still vibrating with undischarged energy.  She shifts to narrative discussion -- geological time compared to our own brief flickering moments -- and to story-telling, with a wondering, worried, and particularly harrowing account of a pair of eerie avant gard films seen by accident by her five-year-old self and her sister.

Less absurd than disjunctive, Samuels' quivering survey of the world around us is a reminder of how easily one may be driven to mental and emotional paralysis.  And perhaps it's an explanation of why the professions of psychoanalysis and socio-psychological counseling continue to flourish. 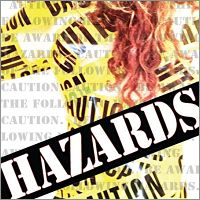