Weed? Well, maybe, when Mom's unpredictably delusional and big siter Rebecca is trapped and Dad died six months before and that runaway sister Julia turns up with an attitude and a backpack of needs that were never satisified.

Max Langert's three-character play takes place in a suburban home, and that in fact is exactly where it's staged: in a suburban ground-floor duplex in Austin's 78704. That strategem gives new meaning to the expression 'home theatre.' It also reminds us subtly of the accepted conventions in stageplay: we are the audience, you are the actors playing the characters, and although you see us, you pretend that you don't. I'm a front-row sort of spectator, so I'm pleased to be so close that I can catch every flicker of expression. If you're the sort of person who like to stay safe in the middle or the back, don't worry. These women move through dining room, kitchen, living room and passageways, in and out of the house, but director Christi Moore keeps the audience as securely tucked away on its folding chairs as if they were gazing through a television screen.

These intelligent and adept women actors deftly construct Langert's cleverly structured plot. The dialogue is rapid, short and sharp, as full of thrust, parry and counterhrust as a fencing match without face masks. Roxy Becker is Rebecca the gloomy stay-at-home sister who's assumed the obligation of watching over her widowed mother; Suzanne Balling's the returned runaway, a breezy naughty penniless moocher who abandoned home because she felt neglected. It's a treat to see Balling, the epitome of serene self-awareness, convert herself into a bad girl. The objective in the opening scene is entirely domestic: the preparation of a Bundt cake for Linda, the mom. Both sisters have hackles raised, and every ingredient's a cause of dispute and an opportunity for revelations.

If I succeed in growing old, I'll want to be as wry, sly and unrepentant as Lana Dieterich's consciously loopy Linda. These roles seek Dieterich out, perhaps because of her gamine-like appearance and her mastery of deadpan delivery. Her portrayal of the Bundt-loving Linda shares a number of comic qualities with that of Violet Weston, the insoucient matriarch of August: Osage County she created for the Zach Theatre four years ago -- with the welcome difference that Linda's neither depressed nor a drinker.

Sibling clashes, old resentments, a prodigal daughter seeking justification and maybe even acceptance -- this could be the stuff of a dark and intricate tapestry as depressing as August: Osage County. Langert's carpentering of these elements is far more encouraging. He surprises with plot turns, amuses with onstage activity ("Yahtzee!") and provides delusions that are comforting rather than destructive. Good Weather for Bundt Cakes uses immediately identifiable stereotypes, wit, and a solid plot with captivating compression of time and realities. It's a talky piece, one that uses revelation, conflict and resolution rather than introspection, and Director Christi Moore keeps this eighty-minute script cracking along at a pace that has you glancing around expectantly to see where the next surprise is coming from.

And if you're lucky, before the show there will be some mini-Bundt cakes available at the card table on the drive outside. From Austin bakers Nothing Bundt Cakes. But without the weed! 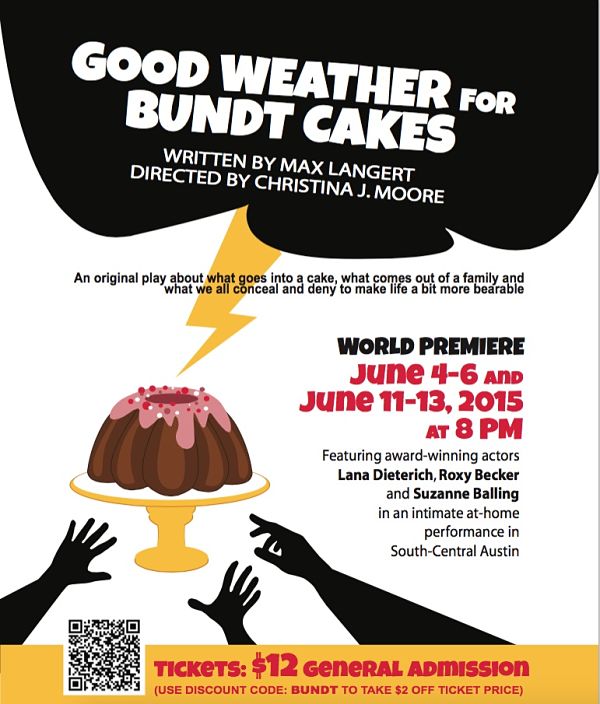