Review: Ay, No! by Teatro Vivo
by Michael Meigs

Liz Coronado Castillo's comedy telegraphs its quirky contradictions right on the poster: One chica. Two tías. And three fairy-drag-queens.  The mind boggles: let's fling a trio of campy drag performers into a patio occupied by a thoroughly traditional Latino matriarchy and enjoy the fireworks and confusion.  On opening night most of the audience was enthusiastic and willing to linger afterwards to praise the humor and the message of tolerance. 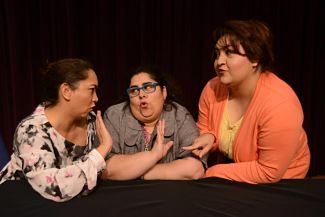 The poster math is wrong, by the way.  There are two chicas -- Alicia is returning from her first year at college, bringing home a friend who turns out not to be a boyfriend but instead a woman friend.  Three strikes: Cathy is blond and Anglo and gay (and it's not clear which of those qualities causes the greatest offense to the miffed women of Alicia's family).  And there are four drag performers, since the drag chorus is aided and abetted by Joe (Jesus I. Valles-Morales), a happily swishy guy in town who undertakes to imitate a traditional mystic healer (curandero) supposedly trying to cure Alicia.  Given the distance between the costumbristas and the queer camp, one might expect some real conflict and accusations, but the playwright softpedals things.  Alicia's family regards her announcement of her lesbian attachment as a mistake or a whim rather than a perversion; they're a bit sniffy toward Cathy the girlfriend but mostly because she's 'white.'

The not-so-subtle racism detracts from the central concern of sexual identity.  Kika, Alicia's grandmother, wishes that the girl had at least fallen for a Mexican, even if for a Mexican woman.  That gets a laugh.  But the issues would have been much clearer if the playwright had allowed such a plot development.  At least in such a case a Latina girlfriend would have known how to engage and challenge prejudice; poor Cathy is shuffled off to a hotel and kept mostly out of sight. 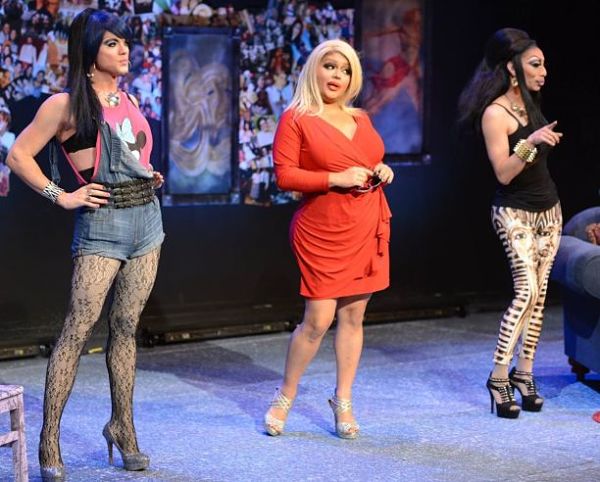 In the first act open warfare is averted by the simple fact that the drag queens are presented as real fairies, invisible to the folks at home.  Not until well in the second act when a truce has been established does the home crew go off to a drag show, where each of the queens gets to strut her stuff in glitter, spangles, lip-synch and wildly theatrical dance and mime.

Loose ends flap.  There's not a single straight male in the story -- perhaps such a character would upset the carefully calibrated balance? And there's a back story about Alicia's mother, absent from the family, presumably because of sexual transgression; the mother sends Alicia some sort of message, asking if she's okay (nothing further occurs).

The audience is drawn to approve the messages from the fairy drag queens, who are all over Alicia with commentary and sympathy, and we like them all the more, given their posturing self-parody.  But for all their enthusiasm the drag chorus is presenting her and us with an unintentionally bleak picture, a life that's gay but not happy. 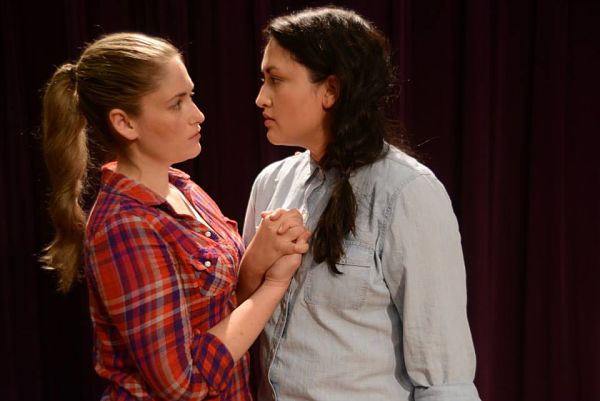 The women at the unfulfilled core of this play stand in the center of the ring, confused and frustrated. Lori Navarrete as Alicia and Patricia Eakin as Cathy initiate the action by braving the almost certain disapproval of Alicia's family.  These characters get very little for their effort while we're enjoying the two tag teams.  Actors Navarrete and Eakin are limited by the sketchy nature of characters; they're relegated mostly to reacting and expressing frustration.  Though they declare their mutual devotion and exchange a couple of chaste and unconvincing kisses, we learn very little about their relationship.  Cathy is generally excluded from the second act.  After the drag show interlude the playwright smashes their fragile affair, jumping forward in time to show mutual frustration, anger and accusation.  The throwaway commentary by regretful drag queen Starkisha (Poff) is approximately, "Oh, well, real love is ten million to one, but you just have to keep trying."

Coronado Castillo's piece would have been more satisfying if it had offered some hope of enduring emotional attachment between the two women or if at a minimum it had suggested a potential quiet middle ground where they could aspire to establishing fulfilling personal relationships, all gender considerations aside.  Instead, she pumps us up with the comedy of mockery, exaggeration and irony.  Surely these two tender young women should be able to hope for lives between the extremes of buckling under or hooking up.

Click to view Teatro Vivo's program leaflet for Aye, No 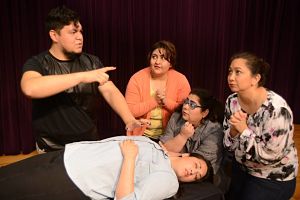