What can one say about Macbeth? Volumes have been written about that one Shakespeare play, its fabled history, and its purported curse. Everyone has read it and seen it on stage, on TV, and in one of  many filmed versions.

What compels production companies to continue staging it? For my money, it's the narrative of a timeless story told in language dense in imagery and offering endless opportunities for variety in staging. This reviewer finds himself thinking in iambic hexameter every time he leaves a Shakespeare play and wishing everyone around him would speak that way. But the evergreen quality of Macbeth is common to all of Shakespeare. Despite truly fantastical stories, his prose and poetry speak to the human condition in all times and places, mocking it and revering it at once. William Shakespeare, five hundred years gone, still holds up a mirror to humanity. 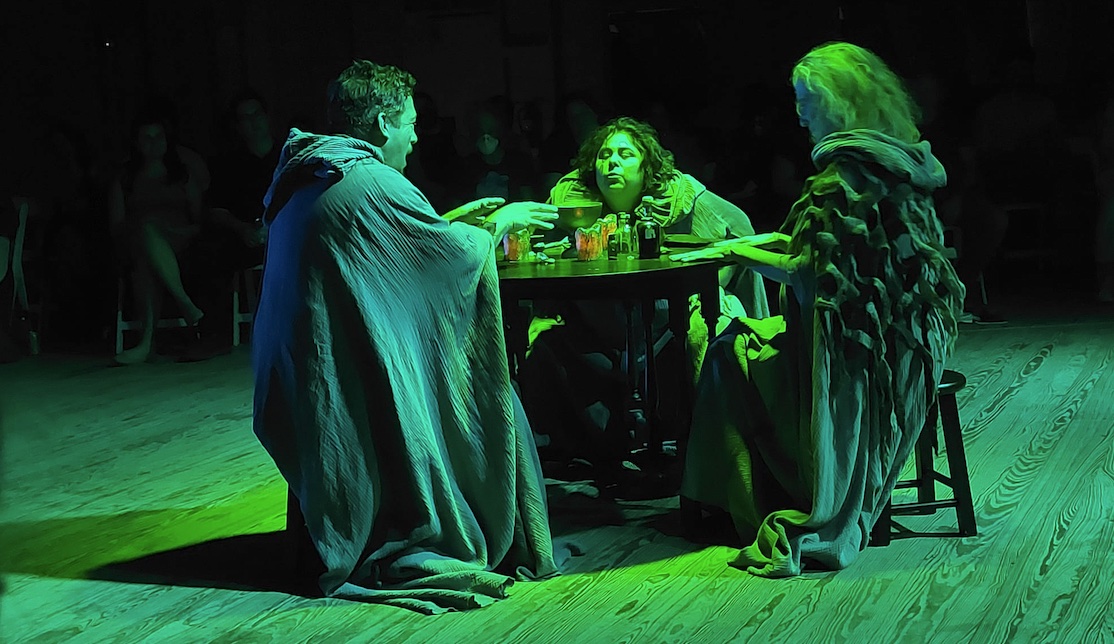 One can only write about the quality of any given production.

Archive Theatre’s power curve is still climbing. Their  complex Macbeth follows on appropriately from the company's Cyrano de Bergerac and The Man of Destiny. This staging is at Pioneer Farms’ Wessels Hall, wooden throughout, a large open-crib-ceilinged space with panel windows and wide roofed porches along two sides. The space is a good match for Archive Theatre’s interest in historical plays, and we hope to see many more plays there. Garrison Martt directs this production along with Jennifer Rose Davis. They have assembled a fantastically talented cast and crew. 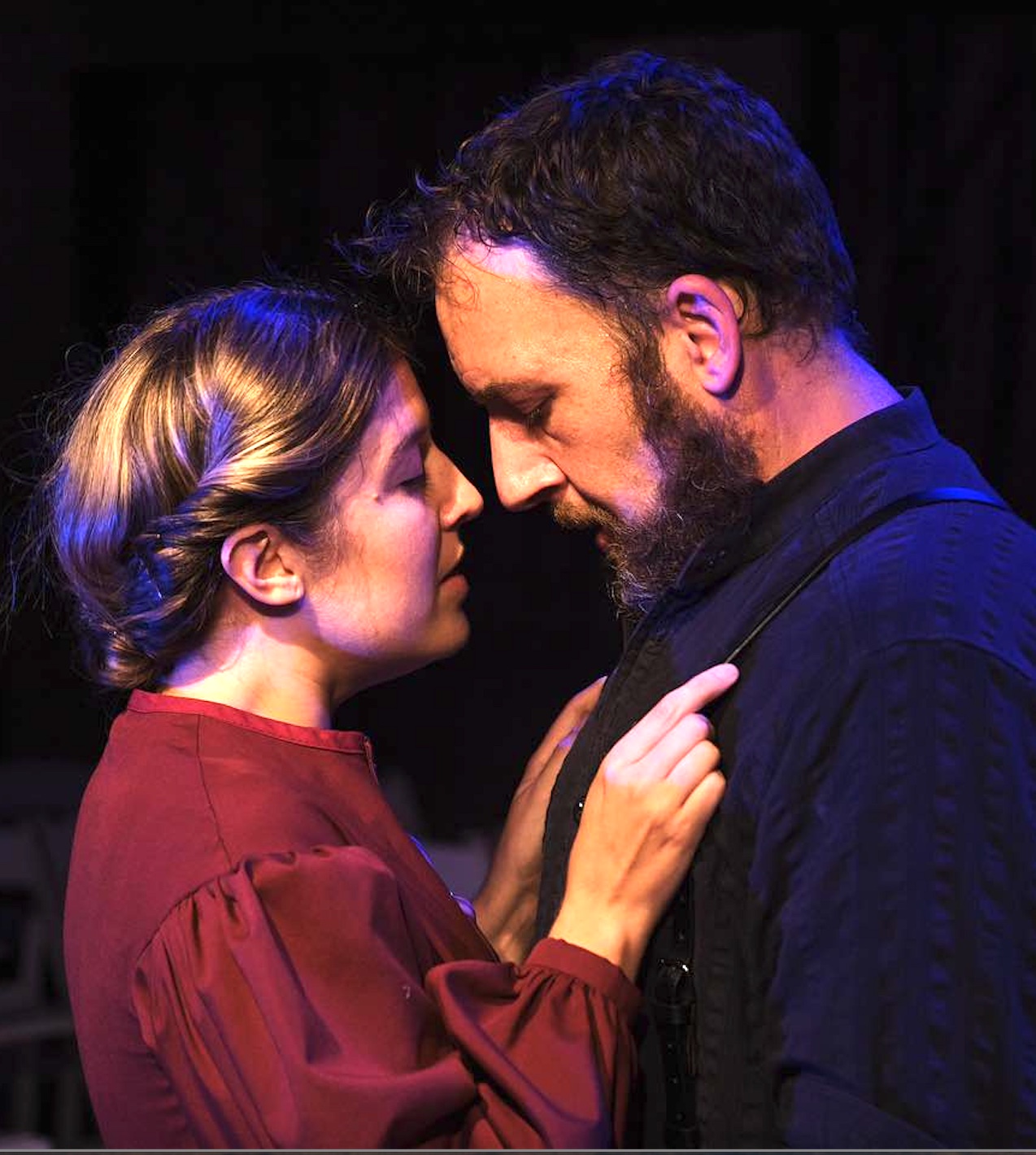 You know the story.  Macbeth, prince of Scotland, is motivated by the desire for power. Moral failing, jealousy of others, and the insistent encouragement of Lady Macbeth lead him to murder the king and commission the killing of his kinsman Banquo. Macbeth’s hubris grows to dictatorial madness. Despite Lady Macbeth’s repeated line, “What’s done is done,” the accomplished murders are never sufficient for the hissing witches, ghosts, and slinking demons who populate the play. The first killings lead to more, right up until the end. Attention must be paid.

Macbeth, like Hamlet, is high Shakespearean tragedy that dives headlong into the supernatural. Others of his works such as Julius Caesar and Romeo and Juliet stay rooted in ordinary reality (but what drama!).  But the great tragedies give us bloody hands, spectral blood, full apparitions seen only the damned (and the audience). The ghost of Banquo at the banquet, played by Amado DeHoyos, was eerily well-crafted, as were the oracular sessions of the three witches. Hallucinogenic potions induce operant curses and prognostications.  All their auguries come true, including the most surreal plot turn of all time: Macbeth would not be defeated “until great Birnam Wood to high Dunsinane hill shall come against him.” Listen for it, but mark it well, along with the other keys not to be given away. One might argue that the witches told the whole story of Hamlet in clairvoyance.

The essential quality of Shakespeare’s supernaturalism is his ability to knife directly into the minds and psychology of the characters. The best example here is Lady Macbeth’s long and brightly colored tragic journey, driven on by witchly curses and witnessed partially by the appalled doctor who symbolizes empirical reality. When the lady ran her nails across the floorboards making a fully audible scratching sound, we perceived the true quill of crazy. Very well done. Kathleen Fletcher brilliantly performed the character's arc from pride to fall to give us a memorable Lady MacBeth.

Fletcher is a native Austinite who in a brief interview after the show commented that until recently she 'd been away getting her fill of NYC theatre. She's back for the foreseeable future. After Macbeth she will be looking for more stage work in Austin. Any production company will be lucky indeed to have Fletcher tread their boards.

The company gave careful and much appreciated attention to stage combat. The clash of swords marked the high points of the action, and multiple dagger dances intervened, daggers being the blades of choice of the murderers. John Michael Hoke takes the credit as fight choreographer. Jason Graf, the company's Macbeth, is credited as assistant fight choreographer. Graf was in all the swordfights and performed them with great athleticism and skill. These and his emotionally nuanced character, as Macbeth must always be, gave us a protagonist for our time and a high mark for others to achieve if they can. Kudos. 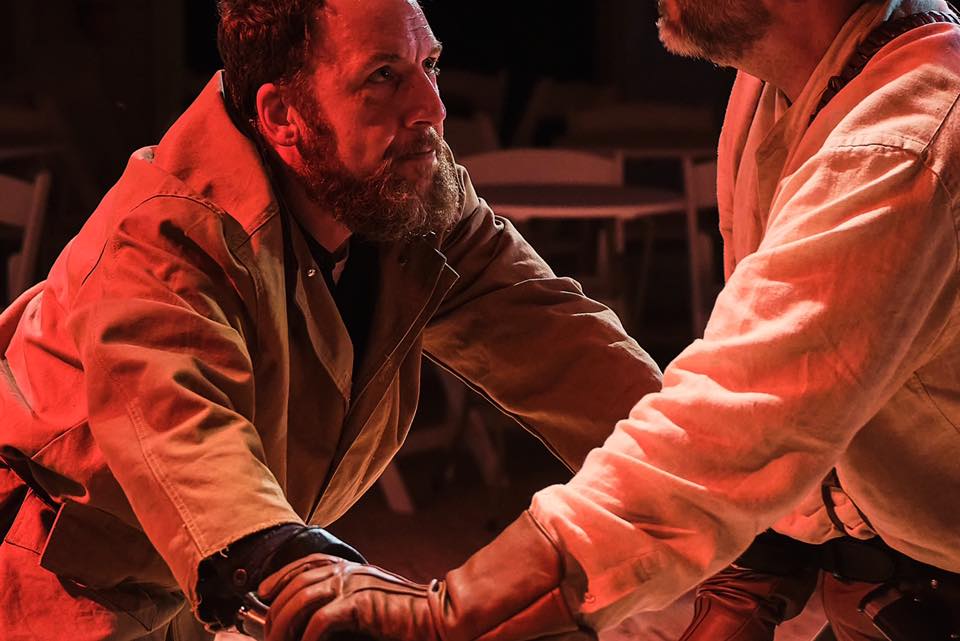 The other principals stood up well as foils to the Macbeths. Amado DeHoyos was a very clear and noble Banquo, double cast as Old Siward. His visage was not sufficiently modified to avoid an initial confusion when he entered as Old Siward, making me think Banquo had come back to life. He needed a hat or something to change his look more distinctively. Chris Casey as MacDuff was the ultimate foil and nemesis of Macbeth and a superb swordfighter. Lady MacDuff was played by Jennifer Rose Davis. She sang a beautiful song at a perfectly placed point in the play, delivering an exceptional performance. This reviewer checked his reference copy of Macbeth and found no song or sonnet written by Shakespeare in that scene. The song was an adaptive addition by directors Garrison Martt, Jennifer Rose Davis, and probably music director Vikki Schwarz. Kudos again.

The three witches, a great clique, had a great time together, hissing and changing character voices as they suffered demonic possession, while still staying clear with their pivotal curses and portentous prophecies. They are Kristin Fern Johnson, Chuck Winkler, and Eva McQuade.

The supporting cast was large, hard-working, and multiply cast. In all such large casts, there is a bit of unevenness in talent, and not all the actors could project booming Shakespearean lines in cadence. It was a small thing, and the supporters—no small roles—drove the play at a breathtaking clip. This was assisted by stage manager Lynn Shaffer Beaver, who did not miss a beat. The lighting design was by Patrick Anthony, who opened and closed acts and scenes with functional and dramatic lighting.

Costume design was a monumental task. Jennifer Rose Davis, Star Maddox, and Maddy Lamb clothed the characters distinctively through all their changes (even the ghosts) except as noted above. The swords and daggers and all their harnessing probably should have received a separate credit for their acquisition and timely entrances and exits, but failing that, the costumers receive it deservedly.

Musical accompaniment always adds so much to live theatre. Vikki Schwarz and Chris Humphrey headed the lively band composed also of Jennifer Rose Davis, Nathan Ford, Gabriel Vazquez, and Stephen Trudell. A posting of a song list posted in the space or in the program would be a valuable touch.

Macbeth runs until September 22 at the Wessels Hall at Pioneer Farm in northeast Austin. It is highly recommended for anyone over the age of 12 with the slightest curiosity about Shakespeare as well as for those with a lifelong fascination with the Bard.

This Macbeth is set in the eastern mountain wilds of the mid-nineteenth-century United States. The venue, the music, and the costumes evoke that period, probably in the 1850's, when Appalachia was even wilder and more remote. Director Garrison Matt brings the events of Scottish myth and history much closer to our own day. An unspoken message may hover in the depiction of violence, the ambition, and the tangled politics; choose your level of interpretation. At a miniumum, his concept reminds the audience that Shakespeare's depiction of fallible human nature remains true even now.

The handful of musicians in the downstage rear corner established the setting with a sequence of fiddle tunes from American folklore and enhanced crucial moments in the action. Lady MacDuff's plaintive song before the arrival of the assassins also came from the same songbook -- was it "Black Is The Color of My True Love's Hair"?

Quibblers and equivocaters may object that this story can't be transposed to this time. There was no king in the unsettled mountains, and the social structure was entirely different. Witches one could certainly imagine; ambition and violence were endemic. But kill and king and establish a dynasty? Flee to Maryland and Georgia? 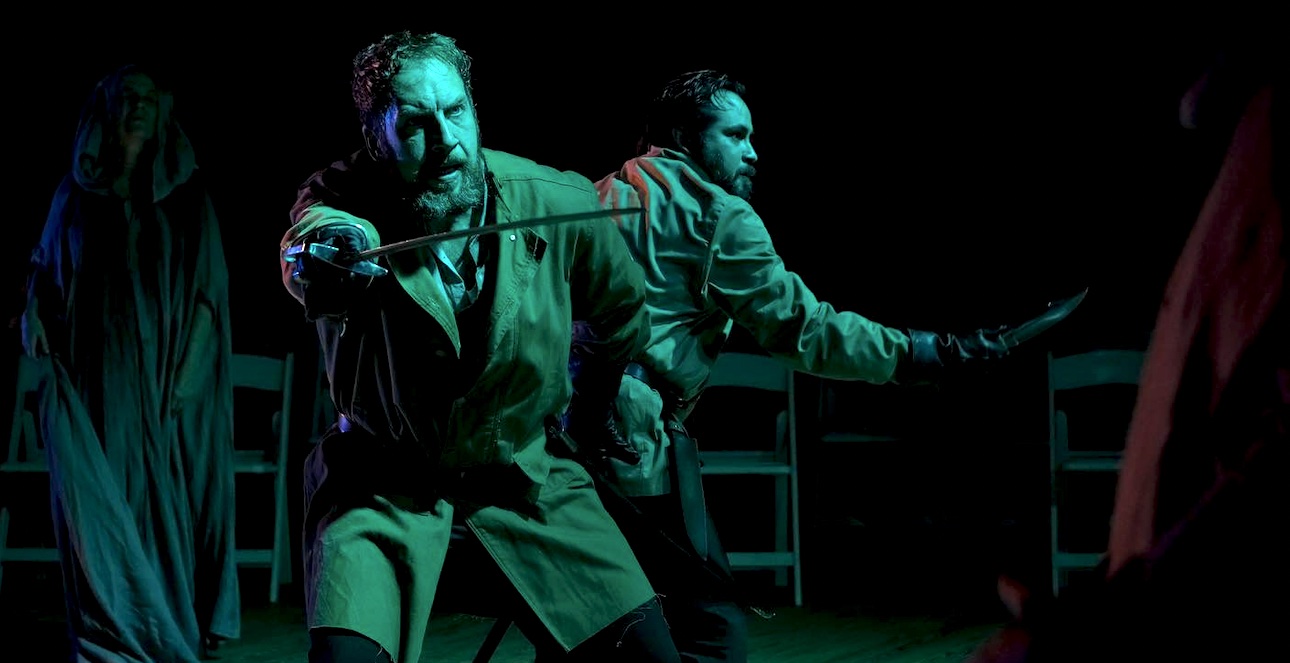 The answer lies in the very fabric of theatre. We enter a special space and accept its rules. By definition, literalism is banished.  For example, we know that the actor portraying Banquo does not die, though Banquo certainly dies and returns as an apparition. We have yielded our disbelief; we accept the imagined world as it is presented to us. Part of the pact of "let's pretend" is the audience's agreement to watch, to witness, and to ponder the implications of the presented story for their own lives.

The cast tells this story with force and vigor, all the more impressive in this particular space. Archive Theatre has created the equivalent of an Elizabethan thrust stage, complete with curtained closet for revelations, all on the same level as the audience. Ranks of chairs flank the space on stage right; table seating is arranged on stage left. Personal and up close, the cast members are often within arm's length of front-row watchers.

On the second performance of the run the early abounding energy at times overcame the text. In early scenes, the challenges of a naturalistic style of speech delivery were further complicated by the lack of pauses—either to indicate reflection or to allow the audience to absorb complex content of thoughts expressed. This difficulty resolved itself as the action proceeded. 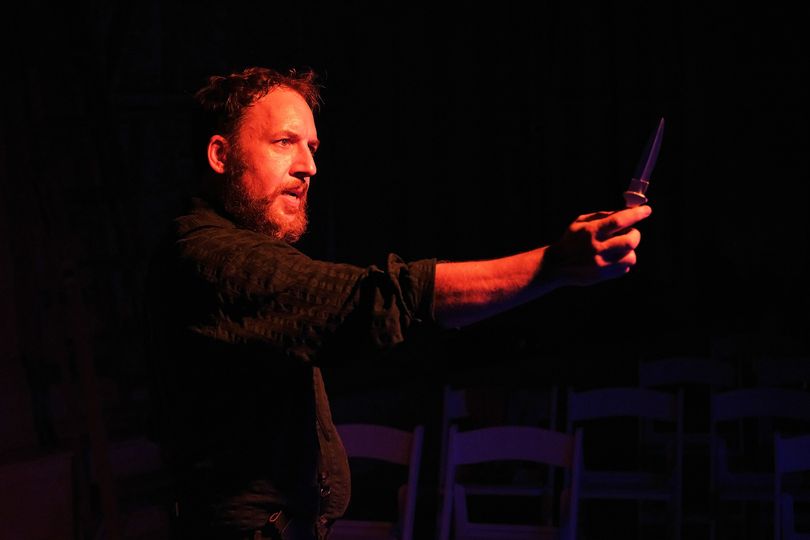 Jason Graf is a vivid Macbeth. His every word is clear, and he gives a deeply convincing portrayal of the protagonist's contradictions and sweeping emotions. His Macbeth is keen, handsome, intent, and athletic, a figure so attractive that he seduces us even as we resist his villanies. Kathleen Fletcher as his lady is coldly ambitious, an enabler of horrors who is convincingly eaten alive by her own monstrosities.

Payton Trahan merits special applause for rescuing this production from the virus. He stepped into the role of Ross only two days before opening and delivered his lines as if he'd been rehearsing them for a month. Yes, he carried a rustic chapbook as a prompt when needed, but the character he delivered was complete and convincing.

Chris Casey's experience on the Shakespearian stage was evident in his fine scansion and vivid portrayal of the bereft MacDuff.

The directors made judicious cuts to the text. For example, the MacDuff child became a swaddled infant instead of a cutesy child questioning his mom. I regretted a bit that Christine Bush as Malcolm did not practice the deception of pretending to be unfit for kingship, for her Malcolm had the wildness that would have made such lies credible.

Terrific stage combat choreographed by John Michael Hoke and by Graf. Blows were decisive, parries were apt, and the outcome appeared uncertain throughout the arduous final combat.

Archive Theatre's staging is a valiant Macbeth, done with thought, design, and respect both for the text and for the director's concept.

Click to view the online program for Archive Theatre's Macbeth.

There will also be an abbreviated daytime educational performance that will be scheduled according to the availability of the actors, and the needs of the participating schools. 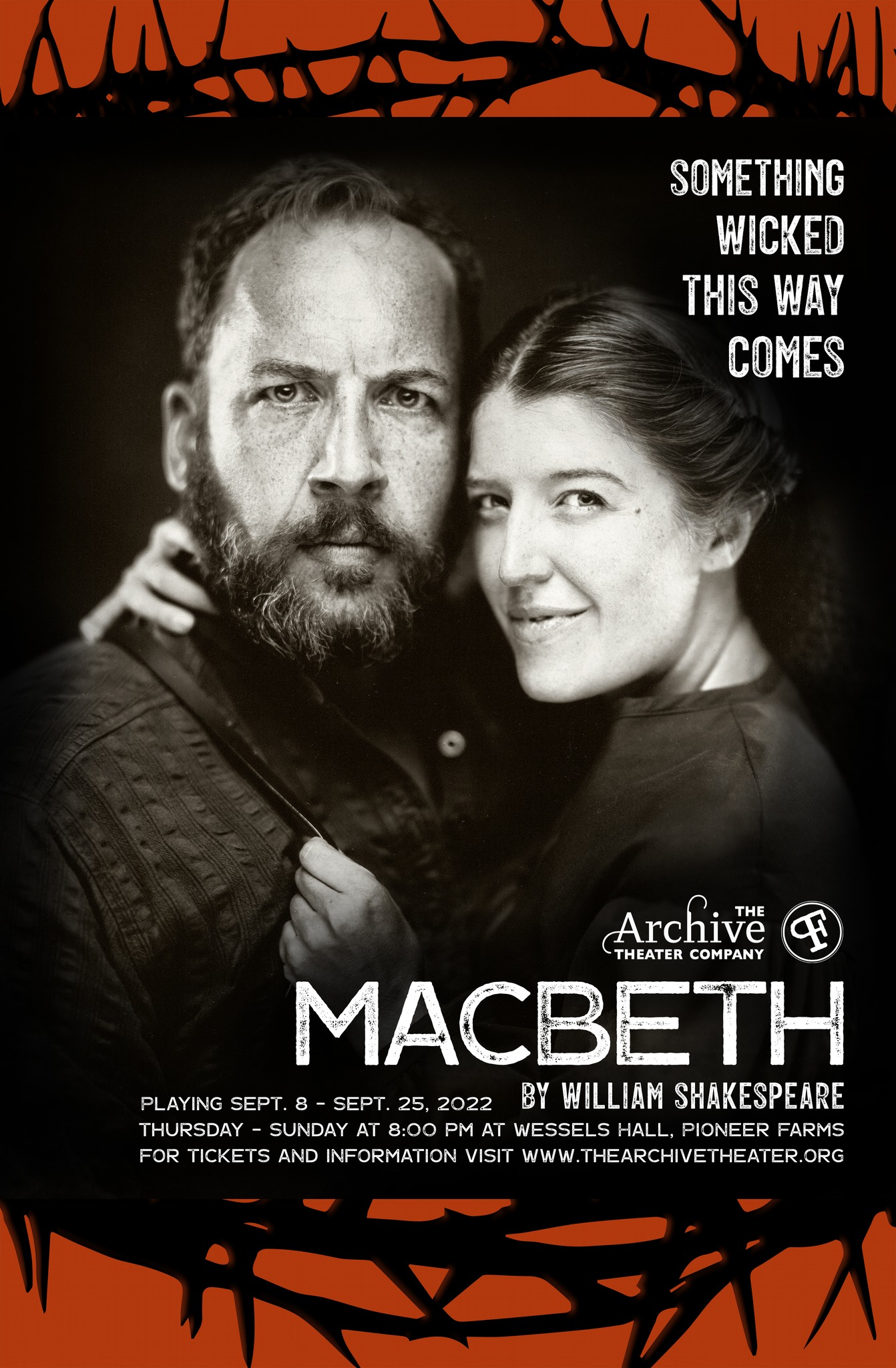 Mission The Archive Theater’s mission is to breathe new life into classical theater and literature of the 16th through the 20th centuries. We create new translations and adaptations of beloved …