Review: The Marriage of Figaro by Austin Opera
by Michael Meigs

What a way to end the famine of Austin performance! Taking in Austin Opera's striking production of the Mozart's comic opera was the equivalent of consuming an entire wedding cake over the course of a lengthy evening.

The Marriage of Figaro (1786) is by common consensus one of the best and by performance history one of the most popular works of operatic staging, so the audience in Dell Hall, Long Center, Austin had every right to expect a treat. What they got—after presenting their COVID vaccination credentials to exacting scrutiny—was dazzling both to ear and eye.

Bravo to mezzo-soprano Liz Cass, whose opener wasn't an aria but rather an engaging and informative lecture-orientation to Mozart, the musical scene in Vienna, his patron Joseph II, and his collaborators. Cass, of the Austin-Opera-founded Armstrong Music School, is as confident in her delivery as she is in her guidance of LOLA (Local Opera Local Artists).

A towering set of two huge modular rectangles, designed by Leslie Travers, occupied virtually the entire width of the stage. The enormous and intricate arboral design evoked a family tree, thrown into sharp relief by angled lighting. In the course of the evening burly gentlemen in scarlet and gold livery and black masks would revolve and reposition the units to represent interior walls of various rooms of a high-ceiling mansion. Doors in a row indicated separate quarters of Count and Countess Almaviva as well as those of their servants Figaro and Susanna, fiancé and fiancée. The handsome, strong-willed count has publicly renounced his "feudal right" to bed any of his female subjects, but Susanna is too sweet and appealing for him to stick to that vow.

Lust and love simmer throughout the plot, thoroughly ennobled by Mozart's music and by the astonishing quality of the entire cast. Austin Opera reduced the chorus to a meager few, perhaps from the same concerns that prompted the company to keep the front five rows of the enormous hall entirely unoccupied.  That's a lost opportunity for local talent, but the power of the core performers is more than enough to fill Dell Hall, over the the 43-piece orchestra conducted by Timothy Myers.

This four-act work is presented in two parts, with the scene changes providing serene segues between I and II, III and IV.

To give you a notion of these riches, I'm sharing both musical excerpts and photos of this astonishing event. I was particularly delighted by Lindsay Metzger's portrayal of Cherubino, the male page who's a fool for love of any woman whatsoever. It's a classic "trouser role," one in which a woman is cast as a male, typically a boy. There are layers of comedy here: Metzger plays a boy who's perpetually infatuated and therefore always in trouble, and who in an intricate series of deceptions is later disguised as a woman. Here she is, in an early scene, responding to Susanna's request to Cherubino to sing his composition "Voi che sapete che cosa è amor" – "You ladies who know what love is, is it what I'm suffering from?":

Caitlyn Lynch provides my favorite moment of this sweeping spectacle. In Act III, after Figaro has been unexpectedly reunited with his long-lost father and mother (another hint of Roman comedy), the countess remains solo onstage and delivers the moving aria "Dove sono i bei momenti" – "Where are they, the beautiful moments." She conveys a sense of desolation and yet at the same time of strength that will be more amply demonstrated in Act IV as the count's selfish indiscretions are exposed.

An interview with director E. Loren Meeker provides additional insights into both Susanna and the countess, as well as exploring the relevancy and the depth of these characters. The title of that article in the program is somewhat misleading, undoubtedly a teaser ("Mozart - A Feminist Icon? Or Simply an Ally?"). Meeker's discussion reaches much farther and reveals the keen mind that composed the impressive movement of both characters and plot. You can read it by clicking the program link under EXTRA, below.

Here's the gift of another short excerpt that may reinforce Meeker's concept of Susanna as "actually. . . the smartest person in the room" -- the lilting "Deh vieni non tardar" – "Oh come, don't delay." Elena Villalón as Susanna sings this passage, a call to an absent lover, as a tease to Figaro, whom she knows is hiding in the bushes, convinced that Susanna's planning a liaison with the count.

Austin Opera stages Mozart's The Marriage of Figaro twice more, on Thursday, November 11, and Sunday the 14th. It's a production no theatre lover should miss.

Click to view excerpts from Austin Opera's program for The Marriage of Figaro, November 6, 11 and 14, 2021

The Marriage of Figaro
by Wolfgang Amadeus Mozart
Austin Opera 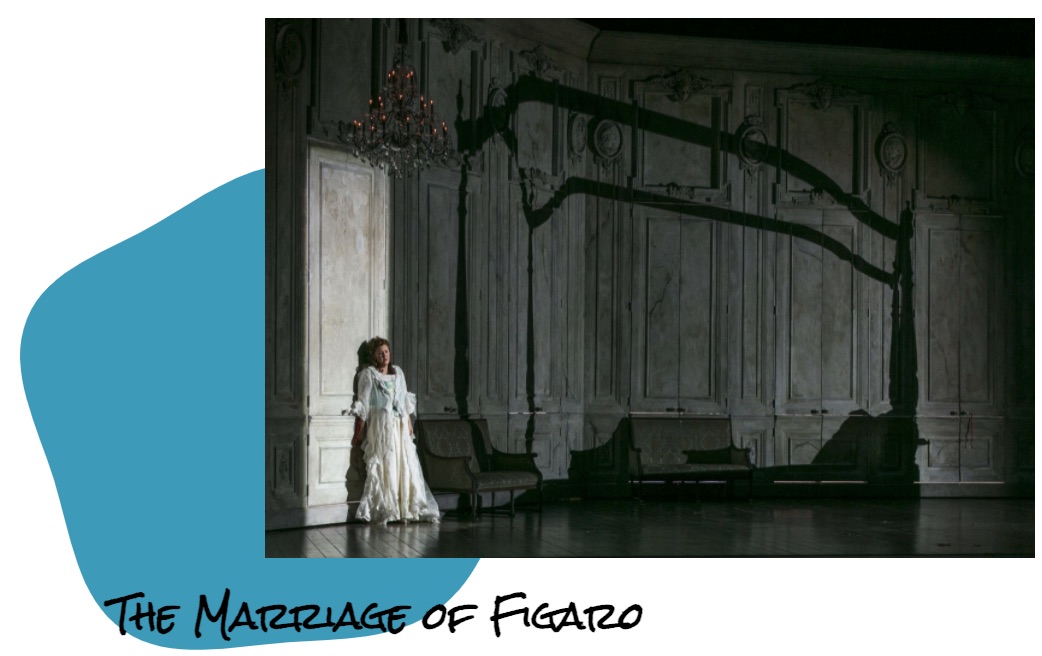 The mission of Austin Opera is to produce operatic performances and educational programs that meet and preserve the highest standards of artistic excellence that culturally enrich the lives of Texans. …