Review: Much Ado about Nothing AND Midsummer Night's Dream
by Michael Meigs

What better way to explode out of careful COVID quarantine of sixteen months than by taking TWO Shakespeare works, back to back over a single weekend, both of them comfortably outdoors?

That was my celebration last weekend. Austin Shakespeare's summer youth troupe did Much Ado about Nothing at the quarter-sized Elizabethan replica Curtain Theatre on the shore of the Colorado, and Leander's Way Off Broadway Community Theatre presented A Midsummer Night's Dream at Smooth Village, an open concrete space flanked by food trucks and picnic tables.

Last year Austin Shakespeare kept its annual summer program alive with Zoom and digital presentations, but this year, with most restrictions lifted, directors Nancy Eyermann and Ann Ciccolella wound up with an eager cast of twenty-one teenagers for Much Ado about Nothing. The actors displayed a remarkable mastery of the verse and provided perceptive interpretations. Particularly strong were Dexter Barnhart as Don Pedro and MJ Scott as Benedick. 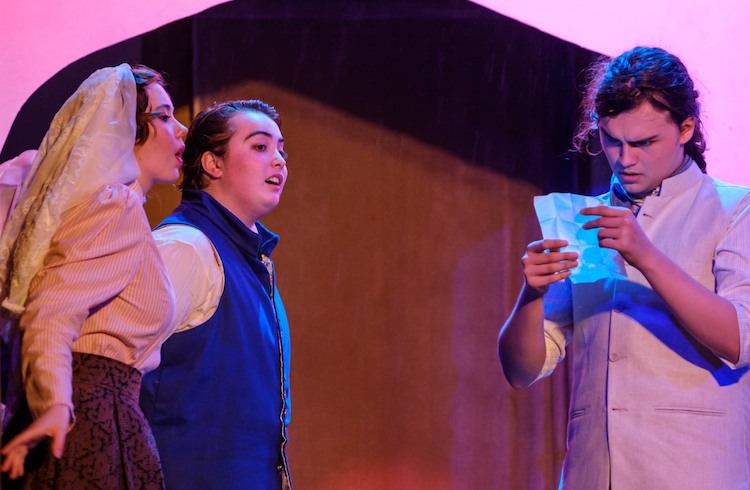 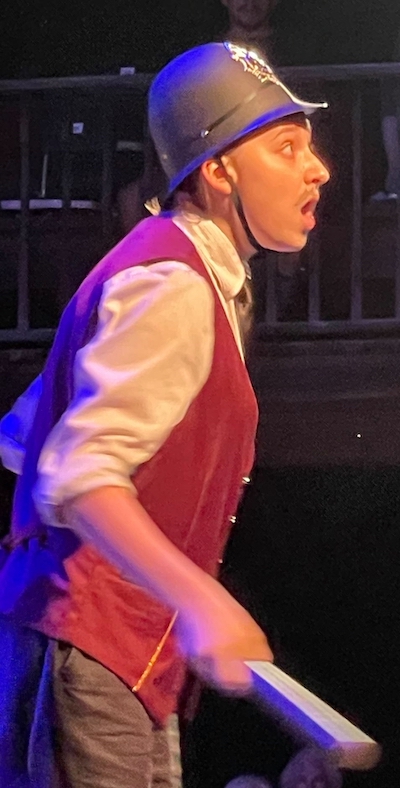 The directors permitted a certain amount of amusing foolery; Jago Mystiek's villanous Don John slipped and slithered across the stage somewhat in the fashion of Andy Serkis as Gollum/Smeagol, and Alley Koenig as Constable Dogberry was Keystone Kops frenetic, even wearing a version of a British bobby's helmet. The garden scenes where mischievous friends fooled Beatrice and Benedick into considering one another romantically were somewhat undermined by the broad nature of the reactions and the almost vaudeville styling; the real movement in these scenes is cerebral, as the targets fed on false information soften their scornful "nevers" to actual contemplation of romantic entanglement.

Norah Barry as Beatrice of the darting wit provided a nice mixture of flippancy and impatience.

One was fortunate if one already knew the play. Movement was clear, and the directors were inventive in use of the barren expanse of the Elizabeth-style stage, but some actors did not project consistently. For example, the initial scene announcing the imminent arrival of Don Pedro and his troupe was hindered by the decision to have the messenger kneel at center and speak directly upstage. On the other hand, in other scenes the actors very effectively addressed the audience directly, a technique that acknowledges the shared complicity of story telling. 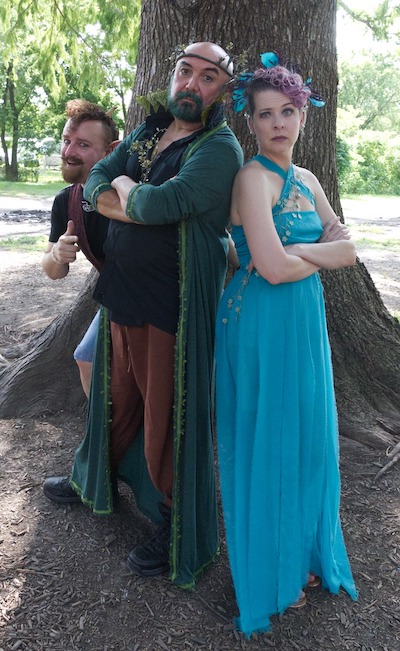 The setting in Leander of a late afternoon was entirely different. This concrete expanse was also a thrust stage, but it was mostly on ground level, surrounded by picnic tables and folks in folding chairs. Since I first started following the company in 2009 Way Off Broadway Community Players has offered mostly contemporary comedies and dramas, along with the occasional melodrama. For the return to audiences, director Beth Watkins went big, with A Misummer Night's Dream.

It's one of Shakespeare's shortest plays, with just over 2,000 lines, a goodly portion of them in prose, but it's anything but simple. Appearing in the (literally) midsummer evening are five groups of characters, not really gathering until the end, when the rude mechanicals present their play. Separate worlds exist for the court nobility, the fairy nobility, the love-touched quartet of youngsters, the hard-handed rude mechanicals, and the diaphanous crowd of minor faires (Master Cobweb et al).

Casting is superb. Michael Costilla's stern Oberon, prince of the faires, plays wonderfully against Michael Clinkscales' eager Puck, vibrating with desire to please, and with Beth Anderson's serenely confident Titania, the fairy princess. At the earthly court Billy Cagle's Theseus is as gregarious and pleasure loving as a Texas tavern keeper. The quartet of young lovers is a constant amusement; Bonnie Lambert as the spurned and then indignant Helena is particularly attractive and volatile. Her clashes with Courtney Kilmer as Hermia ("small but fierce!") show both actors off to their best. 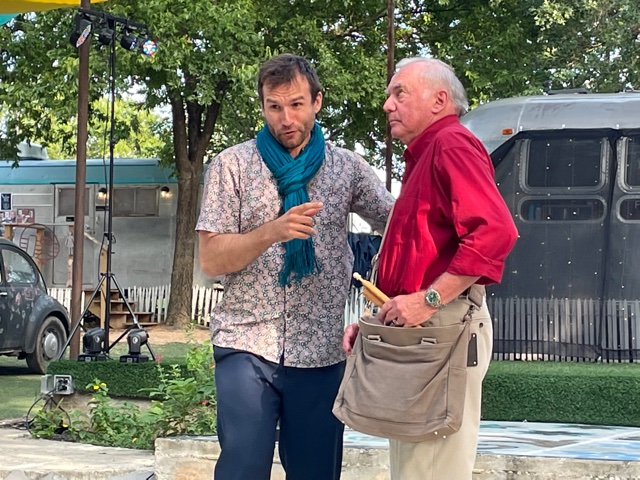 Costuming and makeup are distinctive and appropriate; lots of imagination is displayed in the attire of the crowd of small fairies who gather at key moments.

DIrector Watkins keeps the action moving with characters striding, sweeping or racing into the playing area from either side of the backdrop airstream trailer or even from behind the audience. Costilla and Clinkscales sometimes take seats at the picnic tables along the stage.

There's one bit of blocking I'd have done differently. When the mechanicals finally get to perform their absurdly pretentious offering The Most Lamentable Comedy and Most Cruel Death of Pyramus and Thisbe, Shakespeare has members of the court repeatedly interrupt and comment upon the action. I've never found those comments very interesting, but who am I to dispute Shakespeare's choices? Director Beth Watkins has the mechanicals do their play at a concrete platform at deep center, perhaps a foot or two higher than the main playing area, with the court members seated like a regular audience—so that their backs are turned to many of the spectators. A reversal of those positions would have pleased me, with the assorted and very comical mechanicals doing their presentation in the main area and the would-be wits of the aristocracy visible behind them, raised, so that we could read all their faces during the gibes. 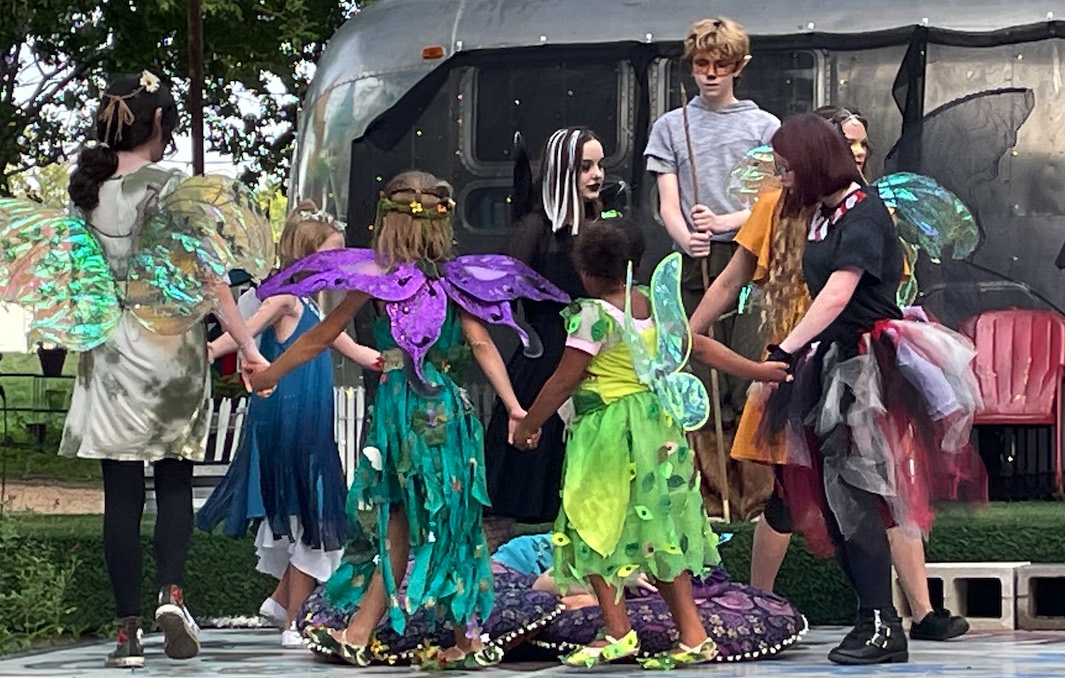 But enough carping. With all that Shakespeare to welcome us back to the worlds of imagination, much celebration is in order. The works and performances are themselves a treat to the long deprived. Just as heartening is the sight of people enjoying the opportunity to step into character and benefit from the cameraderie that always develops in putting on a production.

Much Ado About Nothing AND Midsummer Night's Dream
by William Shakespeare