All right, that reaction was a bit exaggerated, but it captures what the Texas State musical theatre people have done: by building the program over the past decade, the school has assembled an artistic critical mass that allows it to fill and paint the stage with such an overabundance of talent that their productions, including this one of the epic musical Ragtime, would conquer audiences anywhere in the nation -- yea, in fact, anywhere in the world.

E.L.Doctorow's 1975 novel was a bestseller both for the quality of the writing and the quality of the imagination. Set in the 1920's, it blended the story of wildly disparate communities -- the white gentility of the affluent Gentiles of New Rochelle, the exuberant but oppressed 'colored' community, and crowds of immigrants, principally from the shtetls of eastern Europe -- with historical figures both honored and notorious in order to produce a 'magic lantern' portrait of the United States. The 1998 stage musical was scripted by Texan Terrence McNally and set to evocative, often emotional music by Stephen Flaherty and Lynn Ahrens (there's a trio of surnames that hints at America's melting pot as well). 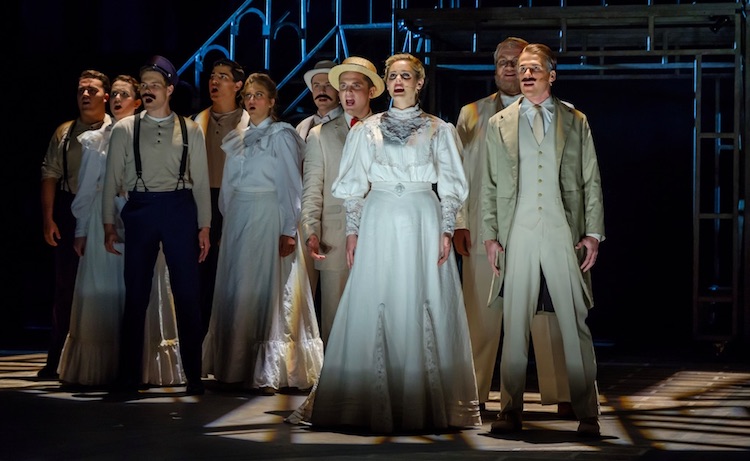 The temptation to the reviewer is to proclaim that this bustling, billowing artwork is "particularly appropriate to our time" -- but in fact with its themes and aspirations Ragtime mirrors the striving -- the pursuit of happiness  -- that is inherent at all times to our nation of immigrants. Not unless nativist reactionaries succeed in closing our borders and choking off that vital flow will Ragtime lose its relevance and contemporary feel. 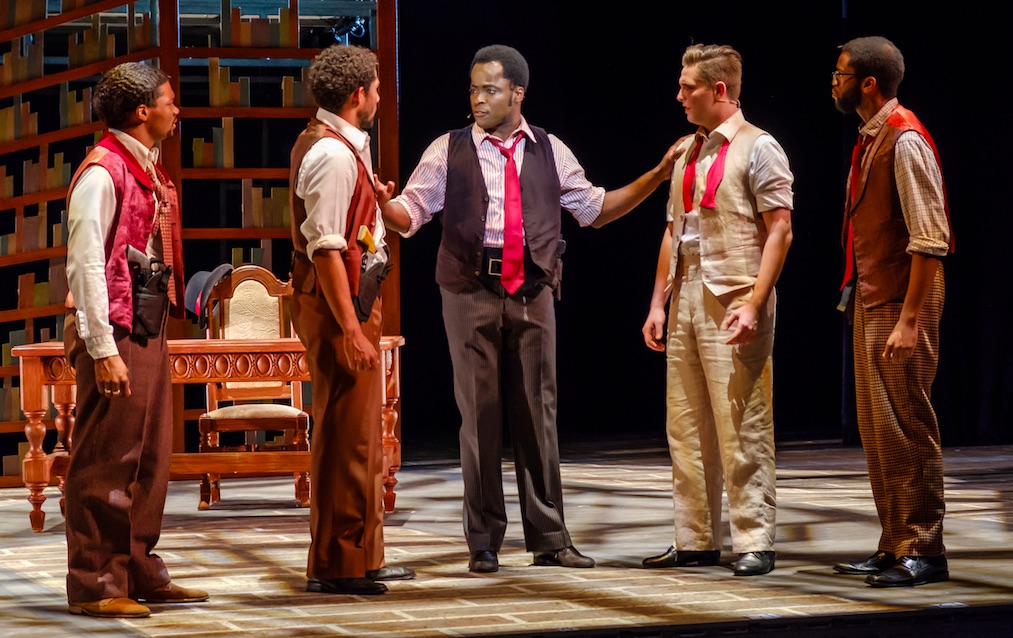 Big themes are entirely appropriate for the towering musical theatre program built since 2009 in San Marcos by Kaitlin Hopkins. She didn't have hands on with this one -- with director Michael Rau, choreographer Kira Schmidt Carper and musical director Austin Haller, she didn't have to. But their department at Texas State attracted and recruited so much talent, both for the student body and for the faculty, that the success of a project such as Ragtime was certainly assured. 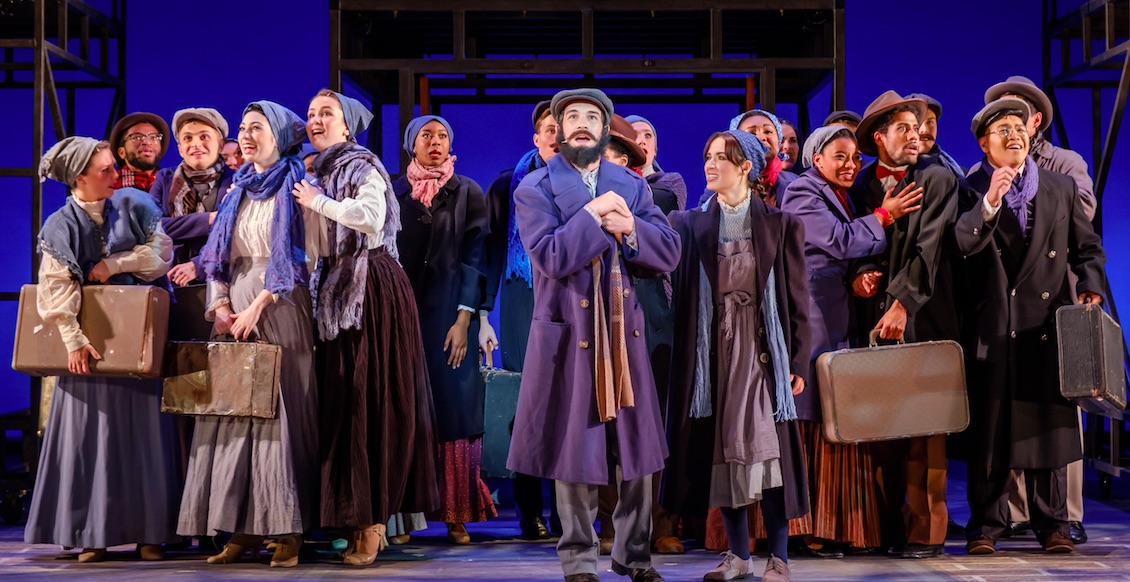 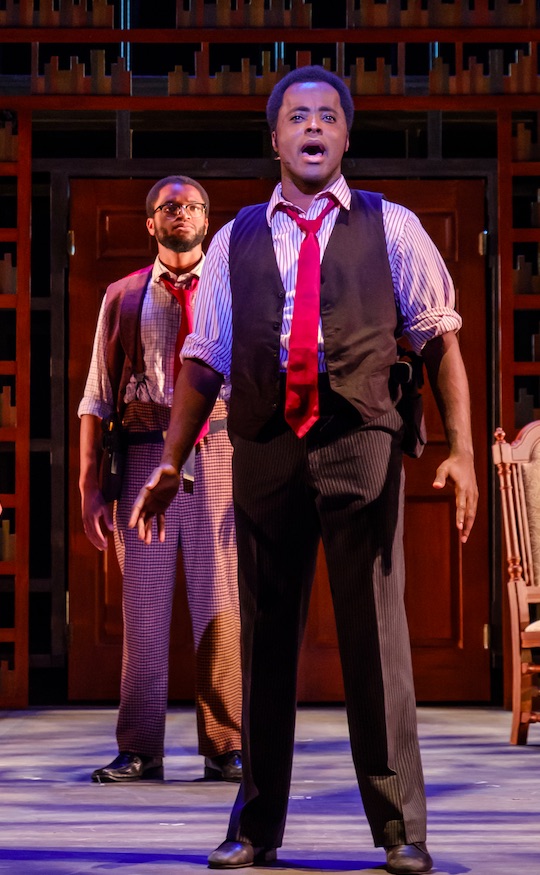 The protagonists are superb, talented and assured almost beyond belief. Amongst the bourgeois of suburban Connecticut the standouts are Emma Hearn as Mother, with dignity and compassion surpassing the ordinary, and Anthony Skillman as Younger Brother; standing tall and impressive in the African American community are Ben Toomer as Coalhouse Walker, Jr., charismatic and mellifluous, and Anna Uzele as principled, delicate, determined Sarah, his love; among the immigrants are Trevor Berger as Tateh the peddler who achieves the American dream and Emma Lenderman as radical socialist Emma Goldman.

Listing the leads like this is almost self-defeating, for though each has star presence, they're closely seconded by equally strong lesser characters and ensemble. No one could resist saucy Reagan Roberts as naughty, notorious Evelyn Nesbitt, for example, or the soaring voice of Rachel Webb as Sarah's friend. Karen wished that Cristina Sastre as Tateh's daughter had been featured and given more lines, but the truth is that even with more than two hours of performance, not everyone could be granted enough stage time.There are at least 37 names on the cast list, folks; long gone are the days when high-cost Broadway could afford to fling that profusion of talent at its audiences. You could have sat through every performance of this run and discovered lots of new delights every time you did so.

I'm a drama studies dropout, myself, enchanted early by the stage and yet unwilling to take the plunge as a drama major at university, for fear of having to explain that choice away for the rest of my working career, whatever it was going to be. These performers have no such misgivings, for they've devoted themselves to achieving levels of artistry that give them a clear shot at "making it" -- whatever that eventually may mean for them.

You probably missed this fireworks display of musical performance. If so, take heart. As astonishingly impressive as was this production of Ragtime and as heart-breaking was the shortness of its formal run, Texas State under the leadership of Ms Hopkins is bound to go from strength to strength. Thanks for the opportunity to experience this American dream, all of you who were part of it. Here's hoping that everyone who attended was able to realize how privileged they were to be there.

Click to view the program for Ragtime at Texas State University 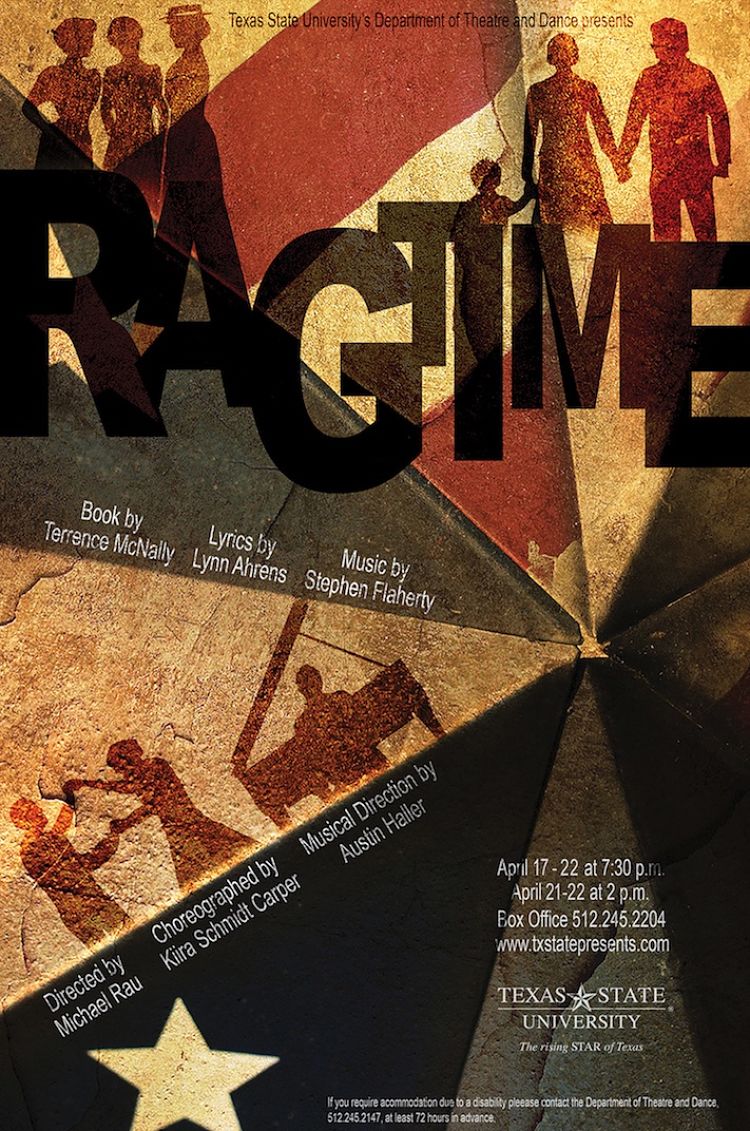