The Generic Ensemble Company (GenEnCo) has mounted a starkly simple set on the Vortex Rep's inside stage, representing a private room in a Japanese restaurant or teahouse: sliding bamboo-and-paper partitions, mats, a low table and two cushions. By containing the hour-long performance of 893 YA-KU-ZA in this plain space, they're playing an evocative, reductionist game. Mia King and kt shorb meet here in an atmosphere of tense threat. King is Aya, female martial arts warrior; shorb is a baleful suited male gangster who makes his intentions plain: Aya will depart with him in an hour, either dead in the trunk of his limousine or sitting dutifully at his side, submissive either as subordinate or mistress -- we don't know which.

What's that 893 in the title? Enough, certainly, to impell an intrigued reviewer to track it online. '893' is the worst possible score in the traditional card game Oichi-Kabu, three cards that sum to 20 when the objective is to obtain a sum of anything up to and including ten. That combination, pronounced Ya-Ku-Za, became the label for the highly organized and hierarchical crime syndicates that date from some two hundred years ago are still present and powerful today.

There's a great deal of watchful waiting in the dialogue between these two characters, so much so that I found myself imagining this piece as a Japanese film in black-and-white, framed principally in closeups to catch every nuance of expression and stance. Co-directors shorb and Jesus Valles work that angle assiduously, in part to illustrate the distrusting silences. The opening scene shows us Aya stepping solo into the room, surveying it, telegraphing her thoughts with the most guarded and controlled of gestures. She has accepted this invitation but she places no trust in the unnamed host, identified only as "1" in the program. Aya's there early, to suss out the situation and, as a precaution, to tape a sharp short blade under the table within easy reach. She even practices drawing it and thrusting across the narrow board. And then, inexplicably, she winds up readjusting the cushions so that she has no access to that potentially life-preserving weapon. 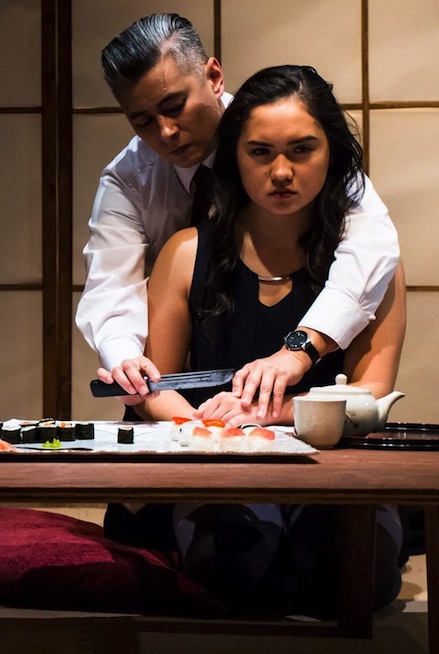 As "1" kt shorb dominates the exchanges, which take place over tea and, later, sushi. Mia King portrays Aya as hotly suspicious, almost pouting, ill at ease and mostly immobile. The threat of physical violence, raised inexorably by the quiet taunts and certainties of "1," is twice fulfilled. The first contest is close to a draw, but "1" retains dominance, and initiates Aya in the ritual of acknowledging submission by cutting off the tip of the little finger. The second, conclusive set-to between the equally matched -- young fury vs. lumbering brute force -- is tightly choreographed and will pull you to the edge of your seat.

There's a twist at the end, but the brief and enigmatic throwaway line of a fatally wounded combatant might well be missed by at least half the audience. Clearer messaging -- if only a gasp and a choked sentence of recognition -- would have helped to close the circle.

893 YA-KU-ZA, described by shorb as GenEnCo's "first 'well-made' play," is nevertheless consistent with the company's mission and concerns. It provides a view of a well-defined foreign genre via a script crafted by Daria Miyeko Marinelli, an Asian-American playwright currently pursuing her MFA at the Michener Center, University of Texas in Austin. The script upends relations between the sexes as one presumes them to be in 'noir' fiction, Japanese cinema, and societal norms, and it works at maintaining a level of tension comparable to that you achieve when a cobra is dropped into a box with a mongoose. The gangster's talkiness, the staging's reliance on menacing pauses and barely visible gestures, and a general sense of immobility don't always keep that tension fine-tuned. But when these two finally drop pretense and politesse, they're full of fire and fury.

Previous years have sold out in advance.

Blue Star Theatre: Discounts for Military, Veterans, and their families. 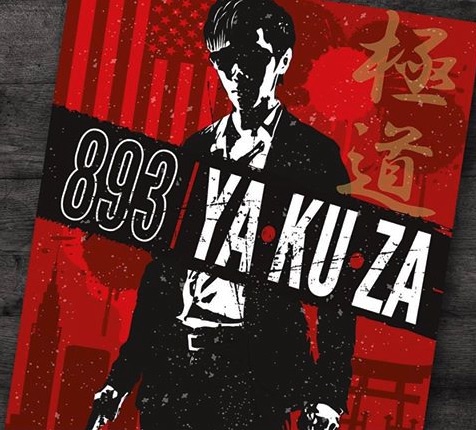