Catalina de Erauso produced by Paper Chairs is a marvelous work of postmodernist theatre, frame-bending and highly metatheatrical.  Playwright Elizabeth Doss takes on a historical theme as she has before (Mast, Poor Herman).  But in our time in which history is poorly regarded and even more poorly studied, Doss avoids a conventional treatment of her historical theme.  Rather than taking on history as a monolithic truth for source material, Doss sees history as something with mutability, and treats her audience with respect, giving it more than one perspective on the events of the life of Catalina de Erauso. As Doss phrases it, she is interrogating history for insights on the story, and she invites the audience to join her in asking our own thoughtful questions of it.  Perhaps only now in our postmodern age can this be done.  The new sensibilities vastly heighten the complexities of presentation and performance of this or any play, but here the obstacles are surmounted with success.  Oh, and it’s also screamingly funny. 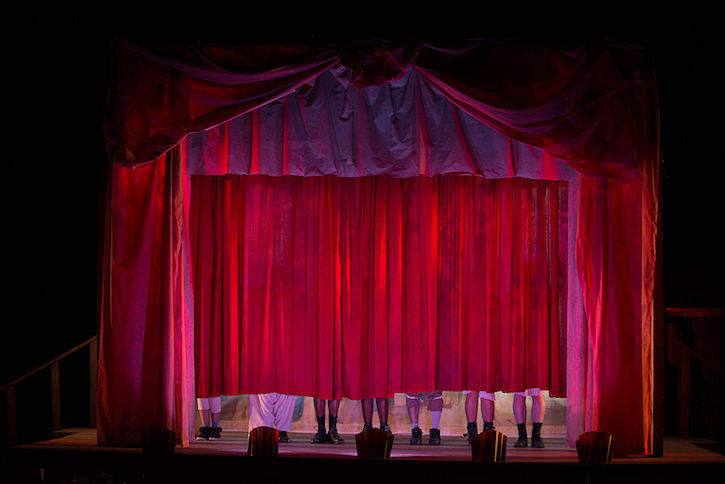 But how does this all hit the stage? At a fundraiser for the show a few months ago, Doss described the show this way: “It’s a farce comedy descending into commedia, descending into grotesquerie and a lot of other things.”

The play was certainly a lot of things.  The play opens on Catalina (Alexis Scott) at the age of fourteen trapped in a convent and receiving incessant whippings from her nun aunt, played by Jesus I. Valles. This was just one more of Valles’ outrageous characters. Alexis Scott played only Catalina, but other members of the large cast played multitudes—dandies, muleteers, mules, conquistadors, cats, priests, prostitutes, Native Americans, God, sheriffs, deputies, and modern media interviewers.  In answer to your immediate question, yes, in keeping with the topsy-turvy irony of postmodern plays, the spavined mules on their way to market received better treatment than the whores.

Catalina escapes the convent in desperation, and in much soul-searching finds a determination to gain empowerment and to live a fulfilled life.  Part of that quest was to pursue her missing father and twin brother to the New World where they had gone to find fortune. Suffering great abuse was the price paid at every milestone, including coerced rape and being forced to kill enough times that she began to enjoy it. By the time she reached the New World she was a fully skilled conquistadora, but she hid her gender from all. This is a classic trope borrowed from opera, but it is employed here for different purposes and it gains a vastly different outcome. 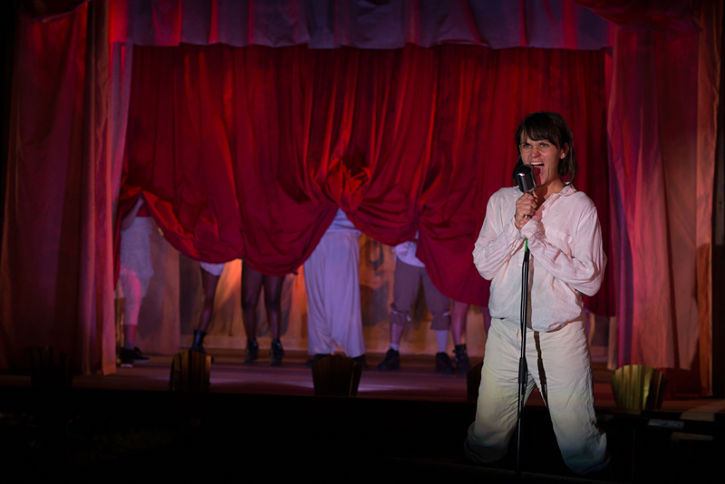 Catalina employs the new convention of stepping out of the stage action to a standing microphone downstage center. There, she reveals her inmost thoughts to the audience, entre nous. This Our-Town–ish metatheatrical device is very clarifying for the audience, but it must be kept distinct. Instead, the microphone stand becomes Catalina’s prayer telephone booth to God. And God answers in the voice of a young lady!  God offers pithy advice as always until the time when Catalina is in dire straits and God doesn’t answer at all. It suffices that the distinct outlines of theatricality had already been significantly blurred.

Obscured, but not to complete opaqueness, is the truth that harsh experience has rendered Catalina less than an admirable character, and certainly not an operatic heroine. But long before there is any moral resolution of the story, the cast drops all character, lounges upon the stage, declares the play over, and conducts a mocking faux-Q& A session. This is the longest and most detailed self-reflexive scene one has seen in a long time. Michael Joplin doesn’t seem to get it, launches into a rant that becomes a meltdown on how much he hates the production. He continues until Robert Pierson walks into the audience and gently restrains him. Soon the cast runs backstage and continues the play in character, but not before describing variable outcomes of the story. 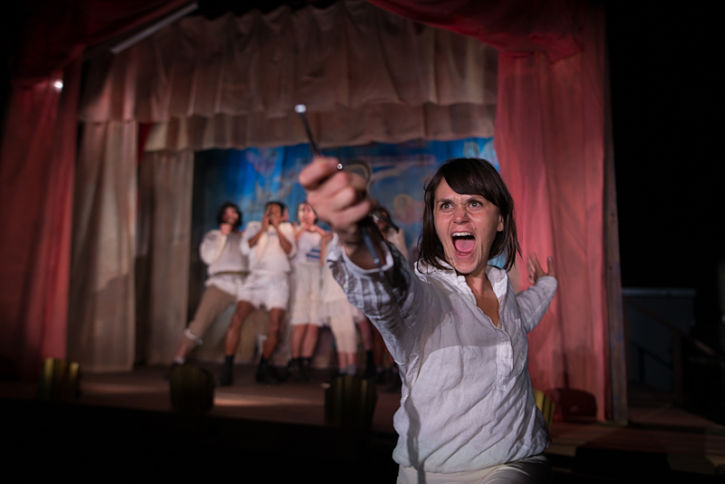 Such fault lines in the narrative render it anything but linear, and the cast conveys the historical jumble without losing the audience. Truly, the strength of the play is the ensemble work of the cast, under the adroit direction of Dustin Wills. In addition to those mentioned, the cast includes Delané G. Keys, Cassandra Reveles, Alexandra Bassiakou Shaw, and Oktavea Williams.

The interactive set is a full partner with the ensemble in conveying numerous disparate settings of the multiple story lines. Unlike many other production companies, Paper Chairs had obviously rehearsed scene changes and the cast carried them out in character, avoiding the trap of a confusing mix of in-character and out of character. This is a tribute to scenic designer Lisa Larattta. Both her design vision for the show and her attention to detail show consideration for the actors and pay keen regard to their safety. Kudos for a rare set constructed, painted, and finished under the challenging circumstances of working outdoors in difficult Texas weather. And among sabertoothed mosquitoes. 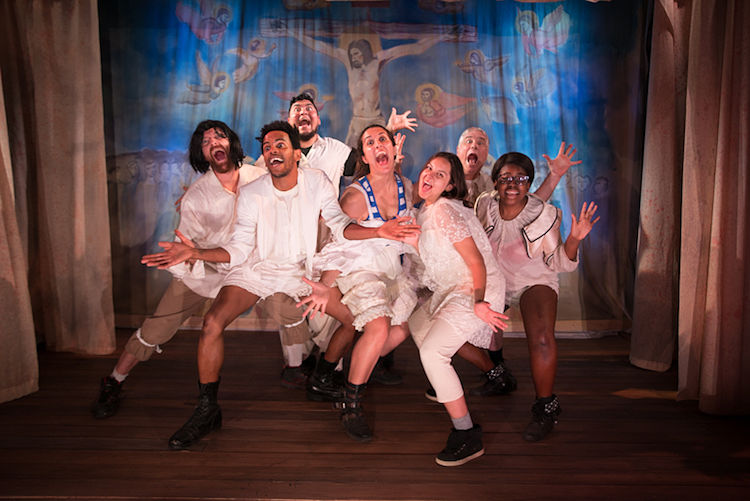 Much of the same credit must go the spectacular lighting design of Rachel Atkinson, who with master electrician Yi-Tai Chung lit two continents from under a lighting grid of open sky.  Technical director Chris Conard kept all the elements together, meshing several visionary designs.  Composer Henna Chou composed the soundtrack under tight deadlines and performed it live every night.

Talk about visionary designs.  Pliny Fisk and Gail Vittori hosted the entire production at their Center for Maximum Potential Building Systems on FM 969. The match of experimental theatre and innovative, earth-friendly architecture could not be keener or more harmonious.

Dramaturgy was by Diana Lynn Small, who seems to have held together the diverse strands of Catalina’s story.  No matter how disjunct its plot lines, the play described one human life progressing through time, although not in any storybook, happy-ending fashion.  Perhaps that is why a key plot device fell out of the story, leaving what’s left to look like a contrivance, or perhaps this reviewer missed it in some riotous action sequence. When Catalina was almost destroyed, a scroll slid out of her vagina where it had been kept for we know not how long. It was a proclamation from the Pope (papal bull?) absolving her of any crime and allowing her to live freely as a man to the end of her days, and anyone who disagreed would be put to death. Here is offered any number of plot resolutions, a home-free card from the Pope. This raises many questions, but the most important one is my interrogation of the play: How did the scroll get into Catalina’s vagina in the first place without any detectable foreshadowing?  Deus Ex Vagina.

No matter.  Catalina de Erauso is recommended for audiences who may be conversant with trends in contemporary theatre and dramaturgy.  Paper Chairs presents us with a show that is experimental but accessible, convoluted yet clear.  Catalina de Erauso may become a benchmark in Austin theatre.  Anyone with FOMO* better check it out.  The play runs through September 30, 2017.

* Text talk: Fear Of Missing Out. 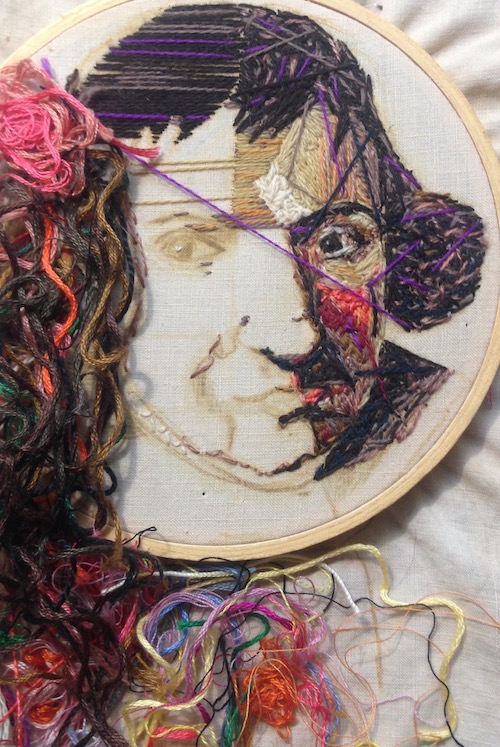