Review: For the Love of Mahalia by RKJB Entertainment
by David Glen Robinson

Several theatrical productions in town now, on stage or just closing, give or claim to give important messages about activism, resistance, gender, and race relations in America in our current time of turmoil. Perhaps the clearest and most moving of these activist guidebooks is about to pass under the radar, but it is not to be missed by anyone. For the Love of Mahalia sings its vibrant song at the Boyd C. Vance Theatre at the Carver Center for one final weekend.The show focuses on the life of gospel/soul singer Mahalia Jackson (played by Jacqui Cross), and of course it is a thrilling musical. The show was written by local playwright Robert King, Jr. and directed by Roger Thomas. Production is by the brand new RKJB Entertainment Company. 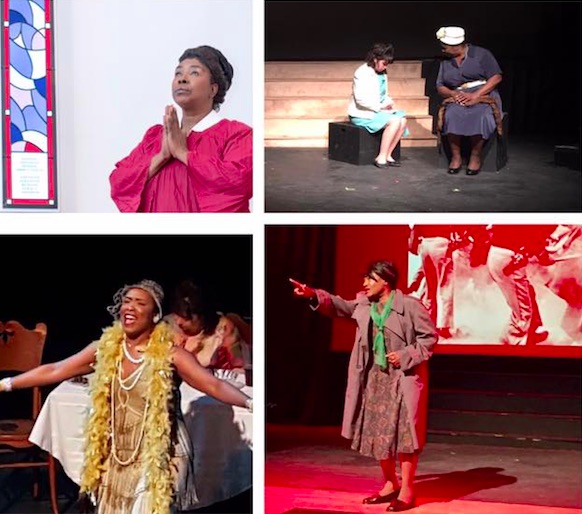 Mahalia Jackson is one of the most intriguing background figures in modern history, particularly of the Civil Rights Era, not so long ago.  She sang gospel songs to huge crowds in Europe and America, all and only to the glory of God.She placed her powerful faith in Him to help her people get over there. Much is meant by the phrase “over there,” as described in the play.Its meanings of equality and civil rights came to the fore in her support for Martin Luther King, Jr. (played by Robert King Jr) and Ralph Abernathy (played by Jeremy Rashad Brown) of the Civil Rights movement. She hosted their kitchen table Bible studies and counseling sessions in her home in Chicago. MLK, especially, relied on her. The story is told of the 1963 March on Washington where he expressed his doubt that he could even speak to such a throng, the image of them around the Reflecting Pool and Washington Monument being so overwhelming. Mahalia Jackson leaned out of the group of dignitaries on the dais with MLK and said (paraphrasing): “Tell them about your dream, Martin. Tell them about the dream.” So inspired, MLK found his voice and gave his “I Have a Dream” speech, one of the greatest speeches of any kind in the twentieth century.

For the Love of Mahalia centers on 1965 and Julie Matthews (Marett Hanes), a young college graduate in journalism. She goes on a quest of sorts to interview Mahalia Jackson (Jacqui Cross), about whom little is known in the popular press. Jackson was extremely personable, easy to find if anyone could afford travel tickets to Chicago. Without giving anything away, it can be written that Julie wrote much about Jackson but discovered far more about herself. Julie’s story is an updating of the story of Baby Moses, Miriam, and Pharaoh’s Daughter. 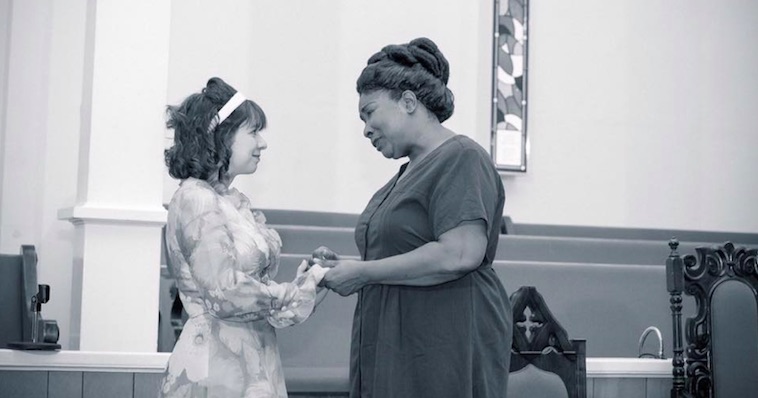 The songs of Mahalia Jackson are given equal weight with the narrative story by and about Julie Matthews. They are sung by Jacqui Cross as Mahalia, with one duet with Ms. Cross and Marett Hanes. Bessie Smith (Sonia Moore) sings in flashback one of her powerhouse 1920s torch songs, attired in an authentic 20s flapper costume. Credit goes to Veronica Prior for all the 20s and 60s costumes, and Jennifer Gross deserves much credit for the period-perfect wigs and hairstyles.

The well-produced theatrical march across the Edmund Pettis bridge in Selma in March of 1965 highlights the exceptional video design of the play, with gut-wrenching archival photographs of the actual police riot by Alabama state troopers that broke up the march, killing one. The staging of the march in For the Love of Mahalia is superior to that of the same event in a vastly better funded theatre across town.

As a musical, For the Love of Mahalia is essentially a star vehicle for singer Jacqui Cross. Ms Cross is a veteran of several Zach Theatre musicals and is a founding member of the relatively new Spectrum Theatre Company. Ms Cross is a worthy bearer of the musical legacy of Mahalia Jackson, and this is not an overstatement.

In every good play there exists a corner of the plot inhabited by a character who throws all the other characters into sharp, clear relief. In For the Love of Mahalia, that corner and that character is inhabited by Frank Benge as Mr. Banks, the cigar chomping, whiskey swilling, cursing, slovenly editor of Image Magazine. Julie Matthews seeks him out to pitch her article on Mahalia Jackson. Mr. Banks says nothing but “no” to her, yet somehow he manages to send her out on her quest, thus impelling the story. Benge (Death and the Maiden, The Suicide, countless other stage presentations) embodies with glee the character of Mr. Banks.

Stage management was by the very efficient Taylor Moessinger (The Great American Trailer Park Musical), but certain annoying sound and lighting glitches lay beyond her control. Specifically, one of the props was a metallic or glass-bottomed food tray. The tray reflected the scenic lighting as large, wiggly figures onto the scrim upstage. They continued to wiggle and distract throughout the scene in Jackson’s Chicago home. As we are into the last weekend of the run and the error has not been caught, the insufficiency approaches inexcusability.

Still and all, For the Love of Mahalia is the best recent theatrical call to social activism, keeping its eyes on the prize of racial justice in America. Mahalia Jackson always sang from her deepest heart, and so does For the Love of Mahalia.  The show runs until March 5th, 2017 at the Boyd C. Vance Theatre in the Carver Center in east Austin.

For the Love of Mahalia
by Robert King, Jr.
RKJB Entertainment

Now on sale via 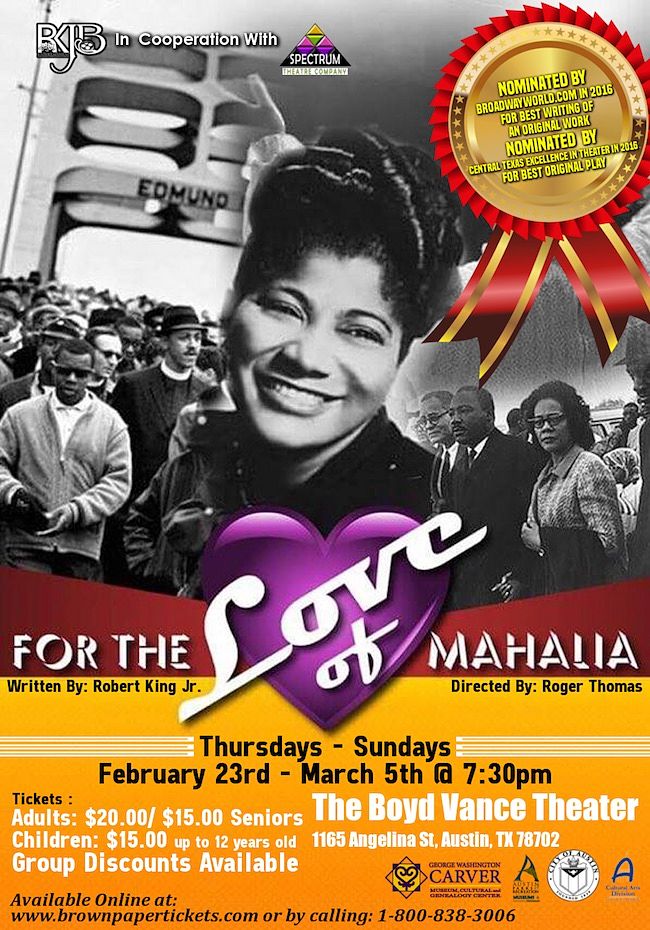