Two lesbians fall in love.  What’s new?  The premise no longer has any shock value, not even any surprise value.  The point that love is love regardless of sexuality has been made amply in our generation.Playwright and director Diana Lynn Small recognizes this and gets on with telling life stories in her new play Hot Belly.  Chili, shoes, facial hair, and ghosts:  these are the stuff of this play, the thematic bits around which Small’s characters tell those stories.

The character of Veronica (Alexis Scott) works an improbable seduction by selling a crock-pot on Craigslist.  Thereafter, she and her new partner Valerie (Elizabeth Doss) pursue a rootless, free, and independent life in the Midwest, selling other peoples’ cast-off clothing and household items in Walmart parking lots while living out of an old sedan. 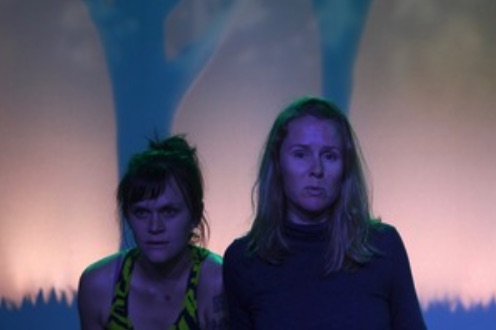 Veronica is a committed and original vagabond, updated for the 21st century. Brash, loud, and wacky, she speaks directly to the audience to start the play and expresses her bravado about the authorities never finding her. She tells some of her back story, about her mother and grandmother (whose car she inherited), but her rootless, fleeing imperative, true to the end, remains somewhat mysterious. She’s a millennial like no other, for sure. And kudos to Ms Scott for bringing her to life.

Doss’s Valerie stands in great contrast to all that Veronica is. When she meets Veronica, she's living with a boyfriend and planning dutiful family celebrations. A crock-pot would be perfect; throwing it all away for Veronica would relieve the boredom. Yet the tug of conventionality builds within her, its clarion call of security and safety ringing out every time the girls get lost in the forest looking for discarded items. Toward the end, the gravitic tug of hearth and home moves the two characters into separate orbits, but those places are where playwright Small surprises us.

Doss’s playing drunk in a bar-fly episode of relationship chaos is a comedic gem. The fact that the episode also pivots the plot is a credit to playwright Small.

The production is spotless, leaving one to wonder how Paper Chairs can top Paper Chairs show after show. One way, it seems, is to open a new, much-needed venue. The play premieres at Austin Public, the refurbished studio complex owned by Austin Film Society. Hot Belly is the first theatrical performance approved for production in the newly renovated facility, former home of Austin cable access TV and other media groups. The new venue is not well named, however; just try googling its location (Austin Public what?). Drive east on 11th and take Rosewood when the street splits at the light. Continue east on Rosewood until you get to Northwestern Avenue. It only turns right, as it is a T-intersection without a traffic light or stop sign. Proceed a block and turn left into the generous parking lot. Or click HERE for a map and figure out your own approach.

Designer Lisa Laratta resists predictability and gives us a spare, warm set with numerous color accents, all leading our eyes from point to point as in an accomplished painting. The set might be entitled “Minimalism with Fluorescent Vibrancy.“ Video projections and an overhead projector offer us Midwestern forests and Walmart parking lots. The actors give us the rest of this diverse universe, especially with a blow-up bed to represent an apartment bedroom. The actors handle the transitions deftly by the actors, accomplishing them partly by staying in character while changing the set. They give a few lines while at work and lead the audience smoothly into the next scene, wherever it may take place. This is again a credit to the direction, the producers, and the entire production team. Paper Chairs has a sharing esthetic and sensitivity mostly lacking in other independent companies in town, some of which seem intent on confusing audiences when they change scenes.

The play gives a serious warning that living off the grid in the 21st century can be lethal if one develops a life-threatening condition. Poor health insurance is vastly better than no health insurance.

The play is a slice of two lives that come together for a while and go their own ways much later. Hot Belly is most insightful in knowing that coming apart is never really distinct and never final, despite the centrifugal forces at play. Final isn’t even final.

Hot Belly is a play for any adult who loves a love story.  It plays at Austin Public, 1143 Northwestern Avenue on the east side, from February 3 to 19, 2017.

A playwright has to be careful with magic. It’s tempting because it's so convenient. It moves the plot along but it flattens out the characters, for if not applied carefully it deprives them of control, free will and motivation.

Granting one character the author’s voice takes the same risk. Tough, emphatic Alexis Scott as Veronica takes on the audience from the first moments of Hot Belly, assuming an outside-the-narrative authority to tell us about herself and to deliver asides that her new acquaintance and eventual live-in partner Valerie, played by Elizabeth Doss, doesn’t hear, no matter how cutting or how broad.

There’s a plot and progression in Hot Belly, but they’re schematic. Veronica has posted a crock pot for sale on Craig’s List and the demure Valerie comes to buy it because she wants to feed comfort food when her fiancé’s good Midwestern family comes to visit. There’s a sneer in that plot turn to match the implicit but ungrimaced sneer in Veronica’s attitude. Val has to wait because there’s chili bubbling away in the pot, and it’s almost done. And a couple of spoonfuls of that concoction transform Valerie's simple and unquestioning view of the world. The fiancé drops away like a discarded cocoon, and the two women set out to live off the fruit of the land, as Lenny once said in a very different context. 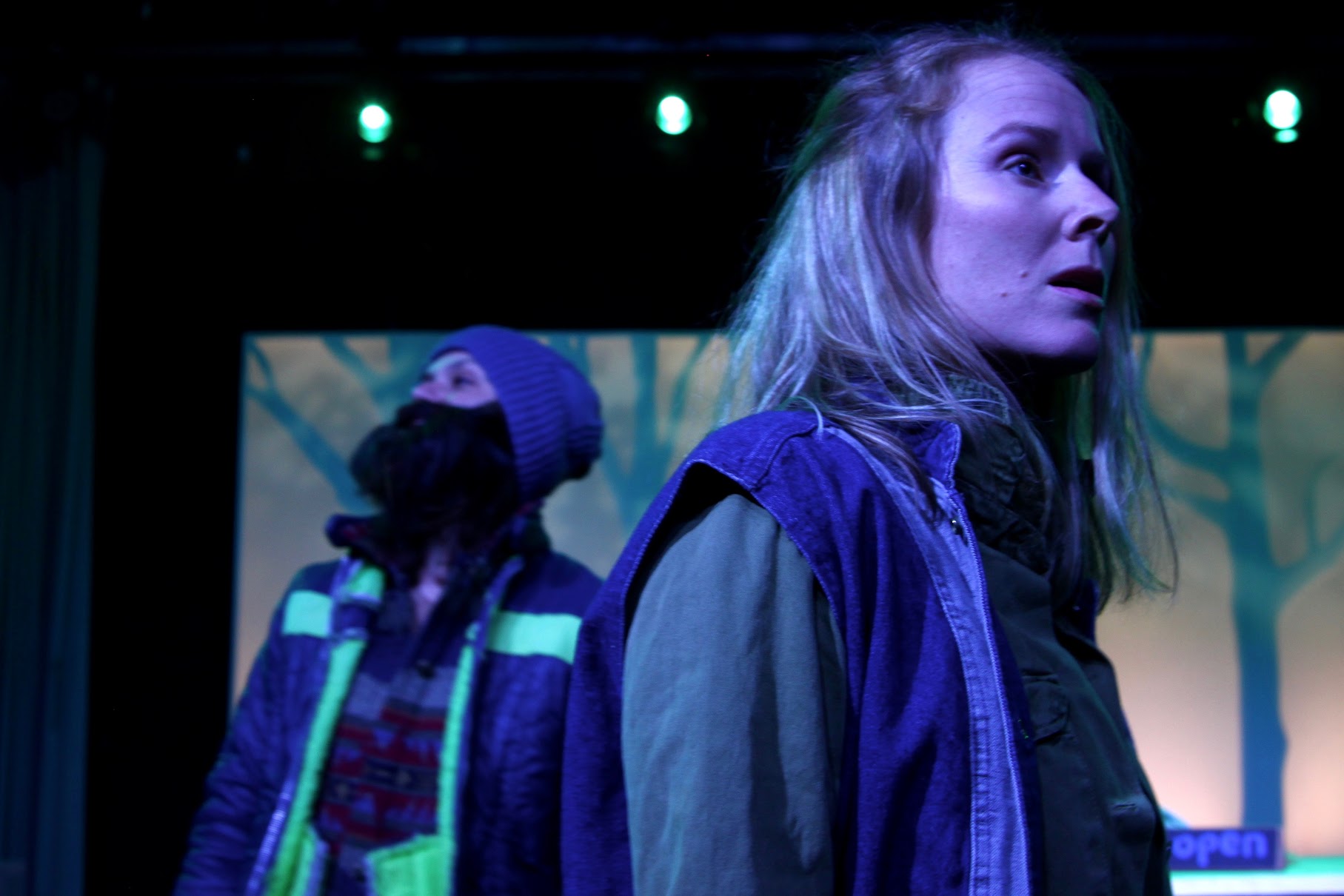 Once you’ve escaped from conventional sentimental bonds, you can take on the consumer society. They comb woods, fields and streams for discarded goods and retail them in the parking lot of Walmart (where else?). That magic chili keeps the customers coming even though Veronica insists there’s no magic to it at all.

And then there’s the ghost, strike three in the magic game. Val saw one when she was a child but it had no message or meaning. And one toddles right in on a visit, Cassandra Reveles draped in a sheet, a cartoon spectacle like Casper the Ghost except with round circles for eyes.

Tough Veronica has been disconcerted at Val’s comment that her body is as smooth as a snake’s, and she conceives of a desire to be hairy. Ghostly powers oblige, and Veronica awakens with a bushy beard that obscures most of her face. One supposes that she’s hirsute elsewhere; giving her a pelt alone would have allowed us to see Scott’s expressive face, most of which is obscured by those odd and ill-fitting whiskers. The new hairy condition seems to stand for Veronica’s struggle to discover her true self, for the women fight over it, and a compromise involving depilation and a return to the everyday working world as clerks in a shoe store only pushes them further apart. They break up, but in a two-person world (with assisting ghost), a breakup can’t continue forever.

Since one of them has been concealing an illness from the partner but not from us, there will have to be a confrontation with mortality.

Scott’s strength and Doss’s vulnerability give life to their sketchily drawn characters.

The awkward plot played against essentially blank emotional and personal backgrounds benefits from some first-class technical work, including projections, targeted lighting, and a central wooden box packed with props to trundle, twirl and transform from kitchen counter to junk stand to food truck to bier for a rapidly fading character. Sound design and original music by Trevor Welch provide assured and appropriate professional backing.

This was my first visit to the Austin Public, a venue suited to film and video work but adapted with a hollow square of two rows of folding chairs to contain the play. The close quarters create an intimacy with the actors that enhances the storytelling.

The audience for Small’s work is probably that cohort of twenty-somethings who are just moving from the shelter of school and academe into the first really challenging part of adult life. Veronica and Val have a lot to figure out and not much help in doing so. They fall in love without passion and drift apart without rancor. They’d like a dose of real, effective magic to set things right, but they don’t know where to find it. Small doesn’t help them, and when all is said, done and played out, a quirky play probably intended as mischievous fun comes out mostly as a downer. 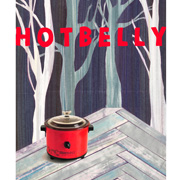