I'm Susanna. You ought to marry me.
It'll change your life to have a wife
Who hails from Tennessee.

Widely known is the name of Susanna Dickinson, Messenger of the Alamo, for she and her infant daughter Angelina, Babe of the Alamo, were the sole Anglo survivors of that bloody conflict. Known also, particularly in Austin, Texas, is the name of Susanna Dickinson Hannig, the wife of Joseph William Hannig. But that's not the whole story – not by a long shot. For even to begin to tell the whole story, you have to know all of who she was: Susanna (nee Wilkerson) Dickinson Williams Herring Bellows Hannig That's right. Five husbands in all. Like most 15-year-old girls in Hardeman County, Tennessee, Susanna Wilkerson never learned to read or write, simply because schooling had nothing to do with providing for a husband nor raising a family. It was through a husband that her path would lead. Never could young Susanna have imagined how long and bumpy that path would be.

Songwriter Fletcher Clark and the Gonzales Crystal Theatre Ninjas youth theatrical troupe present 'Songs of Susanna', the story of Messenger of the Alamo Susanna Dickinson. In song and verse, the Ninjas present Chapter 1 of Fletcher's epic ballad, 'There Must Be a Good Man in Texas'. Fletcher completes the ballad, adding then other original Texana songs presented to commemorate this anniversary of the Fall of the Alamo. This is the final event of the three day 1st Annual Texas Independence Songwriter Festival. Fletcher is joined by Mike Harris on fiddle/mandolin/dobro. 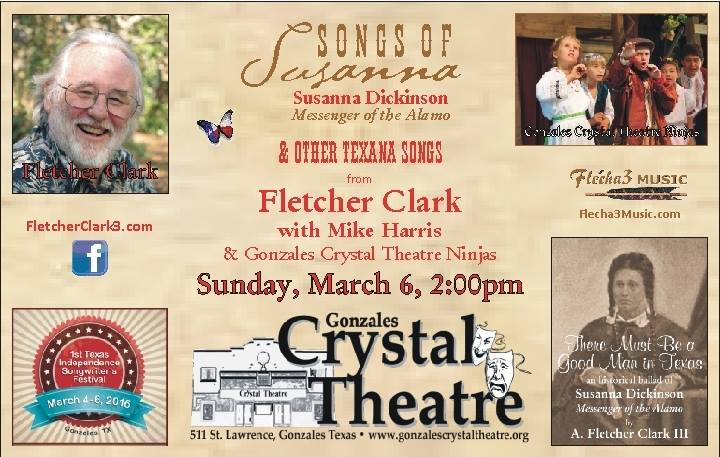