This deliriously funny Southern-fried farce finds the Verdeen cousins of Sweetgum, Texas—Gaynelle, Peaches and Jimmie Wyvette—teetering on the brink of disaster again. Gaynelle, frustrated and frazzled from working too many two-bit jobs, stubbornly refuses to face the fact she's turning the Big 5-0. In a misguided effort to lift her cousin's spirits, Peaches, a sassy, morturarial cosmetologist who's stuck in a romantic dry gulch, is determined to throw Gaynelle a surprise birthday party she doesn't even want. Jimmie Wy, riding high on the success of her new wedding gown boutique for big gals—Wide Bride—reluctantly agrees to help Peaches surprise Gaynelle. But it turns out the surprise is on them when, in a startling twist, the party plans shift to a hastily thrown-together family funeral instead. The hilarity escalates when Peaches' recently declared dead husband unexpectedly returns and his romantic links to each of the cousins is revealed. And the hits just keep on coming as a Cajun bounty hunter who's tracking Peaches' husband crashes the funeral and a jilted bride holds the Verdeens hostage with a loaded paintball gun. All the while, the cousins struggle to avoid their bitter Aunt LaMerle who's hell-bent on cracking the ranks of the elite Daughters of the Nation of Texas and exacting revenge on the Verdeen girls before the dirt hits the casket. As the outrageous complications of this ferociously funny Jones-Hope-Wooten comedy explode into chaos, you'll find yourself hoping your next family celebration—be it birthday, wedding or funeral—is even half this much fun!
Cast includes Mary Southon, Linda Myers, BJ Machalicek, Frank Benge, Rhonda Roe, Raynelle Shelley, Veronica Prior, Gene Storie, John Iacoletti, Kat Tait, Nikki Bora, Susan Dickson and Letty Torres. 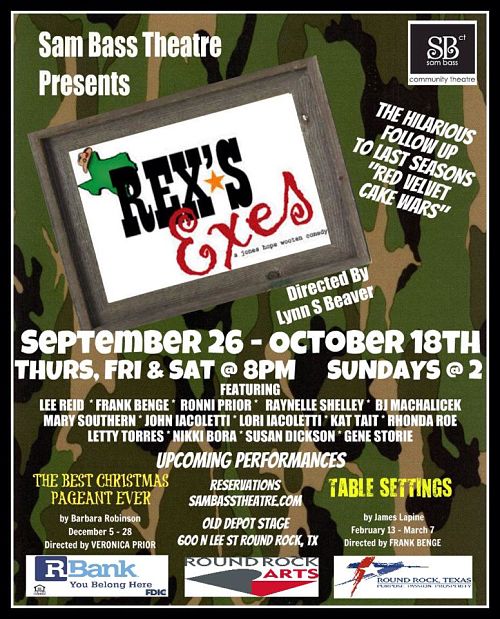