Into The Woods
by Fredericksburg Theater Company

An ambivalent Cinderella? A bloodthirsty Little Red Riding Hood? A Prince Charming with a roving eye? A Witch...who raps? James Lapine and Stephen Sondheim take everyone's favorite storybook characters and bring them together for a timeless yet relevant piece and rare modern classic. The winner of three Tony Awards and most recently a smash-hit Disney film, INTO THE WOODS is an enchanting, touching and musically thrilling experience! "This century's best musical." - New York Post (Rated PG-13) This production has been generously underwritten by Dian and Harlan Stai.

The cast is set for FTC’s (Fredericksburg Theater Company's) production of the classic Broadway musical Into the Woods. Guest Director and Scenic Designer Jim Weismann will helm the production.

Cast in the production are FTC regulars Joe Vaughan as The Narrator, Heidi Eubanks are Cinderella, Will Vaughan as Jack, Casey Cowan as The Baker, Katie Murphy as The Baker's Wife, Mackenzie Grumbles as Florinda, Lucinda Harvey as Lucinda, Mac Burnett as Cinderella's Father, Hannah Lacy as Red Ridinghood, September van der Stoel as The Witch, Rhonda Behrends as Cinderella's Mother/Granny, William Joseph as The Mysterious Man, Jeff Jeffers as Cinderella's Prince/The Wolf, Dylan Eggleston as Rapunzel, Zac Tiedemann as Rapunzel's Prince, Jacob Lacy as The Steward, Carol Ann Shepherd as The Giant, and Heidi Melton as Sleeping Beauty.

Appearing for the first time on the FTC stage is Julie Pici as Jack's Mother, Shawnie Moore as Cinderella's Stepmother, and Megan Willome as Snow White.

Winner of three Tony Awards and a smash-hit film adaptation by Disney, Into the Woods is a musical fairy tale all about what happens after “happily ever after”? James Lapine and Stephen Sondheim bring everyone's favorite storybook characters for a timeless yet relevant piece and rare modern classic. The story follows a Baker and his Wife who wish to have a child, Cinderella who wishes to attend the King's Festival, and Jack who wishes his cow would give milk. When the Baker and his Wife learn that they cannot have a child because of a Witch's curse, the two set off on a journey to break the curse. Everyone's wishes are granted, but the consequences of their actions return to haunt them later with disastrous results.

The musical is considered by many to contain some of the most beautiful songs ever written for the theatre. In their review for the original 1987 Broadway production the New York Post said it was, "This century's best musical." Time magazine called it "a joyous rarity... that affords nonstop pleasure." It went on to be revived on Broadway in 2002 and was also adapted into a Disney film that grossed over $212 million worldwide. The film version also was nominated for three Academy Awards and three Golden Globes.

Excitement is very high for FTC's production, which will boast one of the largest and most elaborate sets ever assembled on the Steve W, Shepherd stage. Scenic Designer and Director Jim Weismann also had high praise for his cast.

"When directing a show at FTC, I’ve come to expect an extremely talented group of performers to audition.  I had no idea I’d end up with the Dream Team in this show", said Weismann. "I honestly couldn’t have wished for a more talented and harder-working group of people."

Weismann also went on to rave about the music and lyrics for Into the Woods, composed by Broadway great Stephen Sondheim.

"Sondheim is a master of the language and I think his lyrics for this show are the most superbly crafted of his career.  They’re clever, both funny and moving, clearly defining the characters and their hopes and their choices.

Tickets on sale from February 8 on-line 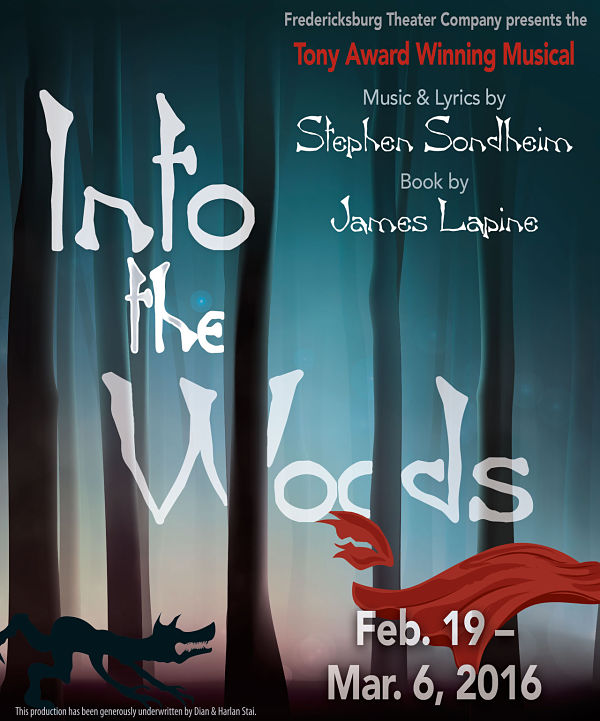