Take a Musical Trip to Another Time with Forever Plaid

...when cars were big, Ed Sullivan reigned, and boys sang in harmony

It was a time of big cars, crewcuts, The Ed Sullivan Show, and beautiful music. On February 9th, 1964, a semi-professional harmony group from eastern Pennsylvania was on their way to their first big gig at the airport Hilton Cocktail Bar. While driving in their cherry-red 1954 Mercury convertible, they were rehearsing their finale when they were slammed broadside by a school bus filled with eager

Catholic teens from Our Lady of Harrisburg. The teens were on their way to witness the Beatles make their U.S. television debut on the Ed Sullivan Show, and miraculously escaped uninjured. The Harmony group, however, was killed instantly.

“This is a musical for all ages. For many people it will take them back to a time when life was much simpler,” says Austin Theatre Project’s Artistic Director, David Blackburn. “It was a time when parents and children actually listened to much of the same music. On the other hand, younger audience members will feel like they’ve discovered a new genre of music.”

This critically acclaimed musical celebrating the precision harmonies and well-choreographed moves that were the epitome of traditional values of the fifties and early sixties… big cars, short hair, home, and harmony. The uproariously entertaining Forever Plaid is perfect for the entire family. Filled with the nostalgic sounds of the period, the musical incorporates beautifully composed, close four-part harmony. "The Plaids" sing some of the greatest hits of the era, including "Catch a Falling Star," "Three Coins in the Fountain," "Love Is a Many Splendored Thing" and "Magic Moments." Forever Plaid features a book by Stuart Ross, and musical arrangements by James Raitt.

Austin Theatre Project’s production of Forever Plaid features Travis Martin (Godspell) as Jinx, Daniel Cline (Carrie: the Musical) as Frankie, Scott Graham (Carrie: the Musical) as Sparky, and Matt Gauck (Baby, Bending Broadway) as Smudge. David Blackburn is Music Director and pianist for the show and is joined by Kyle Welchon the upright Bass. Forever Plaid is directed by ATP co-founder Barbara Schuler and choreography is by Cathie Sheridan.

Lighting design is by James Jennings and sound design is by Sam Kokajko. The set for Forever Plaid is by Jim Schuler and costume coordination is by Veronica Prior.

Forever Plaid will be presented August 14 through August 29 at the Ground Floor Theatre (979 Springdale Road). For the first time ATP will be offering special Cabaret Table seating for two. Tickets are $25-$40 with special group rates available for parties of ten or more. For specific dates, show times, and ticket purchase, visitwww.austintheatreproject.org.

TICKET PURCHASE    Presale and Promotion Packages (through July 26) can be purchased at the ATP website: www.austintheatreproject.org
Beginning July 27. Regularly priced tickets may be purchased on the website or by calling 1-800-838-3006.

Save $$ NOW on Forever Plaid tickets!

EARLY BIRD PRE-SALE TICKETS: You can see Forever Plaid at our box office prices from THREE years ago! Now through Sunday, July 26 you can purchase Premium Seating and General Admission tickets and save $5 per ticket! To take advantage of this great offer, just click HERE

GROUP SALES AVAILABLE NOW: Do you have a group of ten or more people? You can save $10 per ticket with a group of ten of more people. For the first time, ATP is opening group sales BEFORE the online box office opens! Get those tickets HERE

SEASON TICKETS: Don't tell anyone, but you can save even MORE with a season ticket subscription!Our flexible Season Ticket program means you can purchase four tickets and pay for just three of them. That's right! You get a WHOPPING 25% discount and you can use those tickets for any show in ANY combination. Get your season tickets HERE 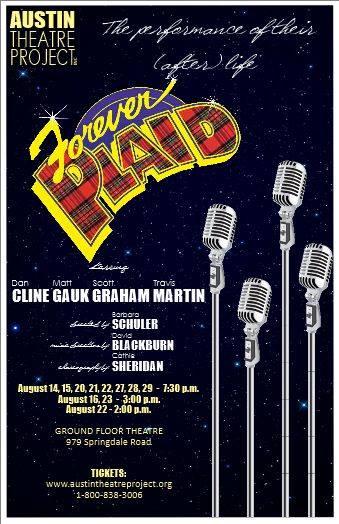