Fukowski is getting a divorce. Bailey has a new girlfriend. Nguyễn is going to Disney world. Mills just wants to sleep. MASSIVE ORDNANCE AIR BLAST is a play about the largest non-nuclear bomb in the American military’s arsenal and four soldiers who watch it explode over a hilltop in Afghanistan. As they wait for the bomb to fall, they fantasize about going home, but not everyone is going back to the same home they left behind. MASSIVE ORDNANCE AIR BLAST explores the relationship between violence, class, and the military industrial complex through the context of the GBU-43/B MOAB, which was dropped over the Nangarhar Province of Afghanistan in April of 2017. This new play asks: What does it mean for soldiers to go home when home feels just as foreign as the country they’re fighting against?

MouthRadio presents a staged reading of MASSIVE ORDNANCE AIR BLAST, a new play by Sarah Loucks, based on a story by Sarah Loucks and Matthew Spain, directed by Jared J. Stein.

Sarah Loucks produces her plays and other nonsense under the name MouthRadio with collaborators from Austin, TX and beyond. MouthRadio creates weird, upsetting, joyful live performance with a focus on experimentation and underrepresented voices. Visit www.sarahloucks.space for more info.

This project is supported in part by the Cultural Arts Division of the City of Austin Economic Development Department and developed with support from the Scriptworks Revision Resource funding. 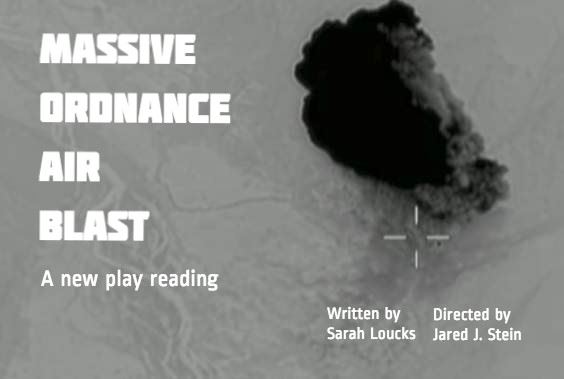