Texas State University will present a bilingual adaptation of William Shakespeare's classic farce The Comedy of Errors June 28-30, funded through a grant from the Office of Equity and Inclusion.

Directed by Jerry Ruiz, an assistant professor in the Department of Theatre and Dance, The Comedy of Errors centers on two sets of twins separated at birth. The twins live in different cities before being unexpectedly reunited. In this adaptation set in Cuba, all the characters from one city speak Spanish and all those from the other speak English.

"The resulting linguistic confusion adds to the humorous chaos that dominates this farcical play," said Joe Falocco, an associate professor in the Department of English, who adapted this script with David Navarro, an assistant professor in the Department of World Languages and Literature. "More significantly, we did this because The Comedy of Errors is essentially about the quest for identity. For so many of us in the United States today, our sense of identity is divided between two languages and two cultures. This play allows the audience to explore their own connection with language through its message of multicultural reconciliation and inclusion."

Parking is available in the Edward Gary Street Parking Garage. For more information, contact Joe Falocco at (704) 754-2321 or jf48@txstate.edu. 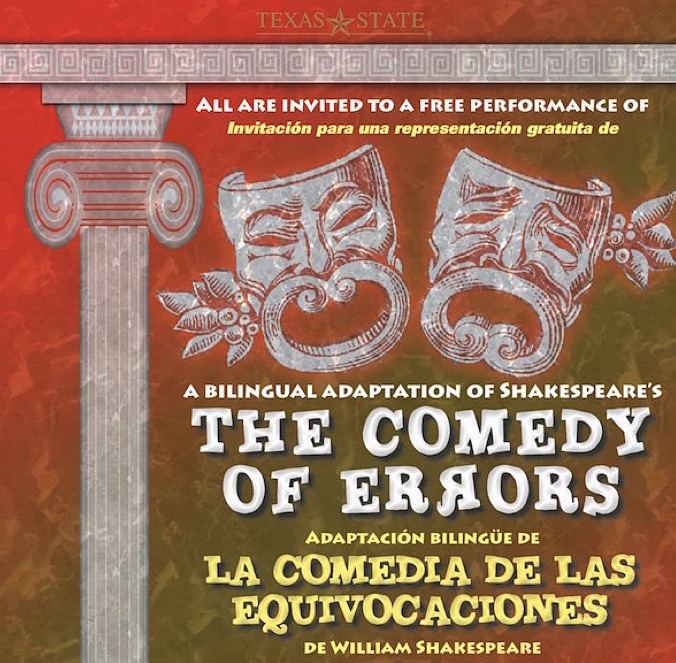