Murder By Natural Causes, a stylish and witty suspense-thriller by playwright Tim Kelly, centers around Arthur Sinclair, a world-famous mentalist, and his greedy and cunning wife, Allison. Even as Arthur performs his act on The Tonight Show, his wife prowls the study of their stylish Beverly Hills home, conspiring with a struggling young actor to murder Arthur and claim his fortune. Together, they hatch an ingenious, seemingly foolproof scheme — but is it? How can you possibly murder someone who seemingly reads minds at will? The smart script is loaded with double-double-crosses and all the unexpected shocks and twists of an amusement park thrill-ride.

The play is directed by Dale Roe, a theatre veteran new to the Sam Bass who founded Chicagoland's popular Gag Reflex sketch comedy ensemble and its Austin offshoot, which performed throughout central Texas for a decade in the early 2000s.

"What attracted me to this script," Roe says, "is how smart it is. I read through dozens of popular and obscure mystery plays and found most of their scenarios to be outrageous with very broad and unrealistic characters. Kelly's script, in contrast, is grounded in reality despite its apparently supernatural subject matter, and the characters talk and behave like real people — awful people, some of them, to be sure. But, real. Everything that happens in this play could happen in real life."

The director admits that his childhood fascination with magic and magicians played into his selection. "The script is wildly entertaining and will keep anyone guessing, but if you ever owned a magic set or learned a card trick, you'll get a special kick out of it," he says.

Tickets are $12-$15 and can be purchased online. Discounts are available for seniors, students, educators, military members and first responders. 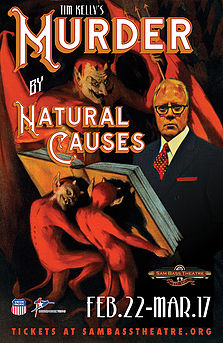