Glamorous socialite Margot Wendice has it all: a wide circle of friends, an exciting lifestyle and a husband who dotes on her. When an old friend visits from overseas, she sends him off with her husband to enjoy a night on the town and curls up in bed for an early night. Then the phone rings and Margot’s evening takes a dramatic turn. Suddenly she finds herself fighting for her life. But who would want her dead? Full of twists, turns, and suspense, this gripping mystery is a masterpiece of writing that will keep you on the edge of your seat.

Frederick Knott, who is also known for penning the thriller Wait Until Dark, wrote Dial “M” For Murder as a 1952 BBC TV special. It later opened that year in a theatrical production at London’s Westminster Theater. It eventually moved to Broadway where it remained a huge success. The film rights to were sold to Warner Brothers Studio where the Master of Suspense, Alfred Hitchcock directed the 1954 release. It was the first time that Hitchcock worked with actress Grace Kelly, and was also his only 3-D feature. Dial ‘M’ For Murder has been remade four different times for television and cinema and remains one of the most produced thrillers in the United States.

Cast in the production are Randi Minjauw as Margot, Pierre Minjauw as her husband Tony, Stan Hicks as Detective Hubbard, Scott Jones as Max, and Jason Rittimann as Lesgate. Caleb Straus is the director of the production with scenic design by Jeffery Cunningham, costume design by Amber Nanni, and lighting design by Addison Powers. Bob Straus will stage manage the production.

This production has been generously underwritten by an anonymous donor.

Admission is $29 for adults, $12 for children 17 and under. Box office hours beginning September 24th are Monday through Friday, 9:00 a.m. through 1:00 p.m. Tickets can be purchased online at www.fredericksburgtheater.org or by calling the box office at 888-669-7114. For more info or directions, visit the theater’s website at fredericksburgtheater.org. 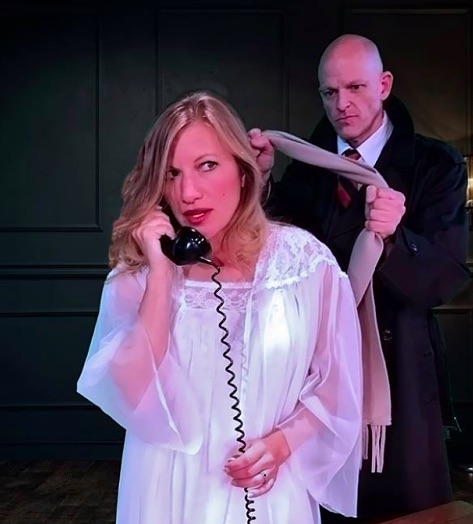 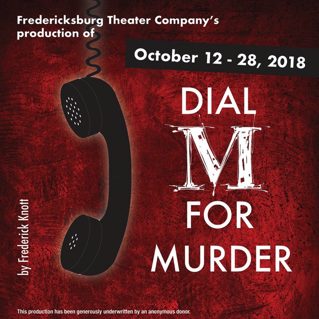