Carl and Phil decide that the ladder to success at the post office is missing a few rungs. They know that big money is waiting for people with entrepreneurial spirit and sound business judgement. They have lots of the spirit but little of the judgement and their new gourmet health food restaurant flounders. Zippy's, a popular cross town spot, has been crowded ever since Cy Manamalancia, a notorious mobster, was shot there and that was over twenty years ago. What if someone could get murdered in their restaurant?

Flaming Idiots is a contemporary farce which takes place entirely in the restaurant kitchen and requires five doors for slamming. “Flaming Idiots” was originally presented June 4, 1992 at the TADA! Theatre in New York City.  It was the co-winner of the 1992 New American Comedy Festival.

Sam Bass Theatre’s production of Flaming Idiots is directed by Sara deSoto who is making her directorial debut  and is thrilled to do it at Sam Bass Theatre. Mrs. deSoto has been involved in every aspect of running Sam Bass Theatre for the past 4 years, doing everything from costume design, to running the box office, as well as acting and even cleaning the grounds, she is now making her way into the only role she hasn’t served in “Director.” Mrs. deSoto has performed in many of Sam Bass’s most loved shows, including “The Boys Next Door,””Inga Binga,” “The Crucible,” and “For The Love Of Mahalia.” When asked about why Mrs. deSoto took on this particular show she said “I chose this show because it has a special place in my heart, being the last show I was cast in my hometown theater in Nebraska. I loved this show, and was always determined to do it again.  The first time I walked into the Sam Bass Theater, I knew that this was where I wanted to do it.”

Sara deSoto is thrilled about the caliber of talent she was able to cast in this fantastic show saying “I have gathered an amazing and talented group of people that, despite the fact that I have read the script many times, still manage to make me laugh every night.  They are all so unique, bringing their own special brand of comedy into their characters.  It is truly an honor to be working with them all.” While this show is relatively unknown to many it is a sure fire hit! Mrs. deSoto says “Flaming Idiots is a fast-paced farcical comedy, that appeals to all ages.  The two main characters seem like managers that everyone can relate to, as they have had to work for them at some point in their life.  The restaurant staff are “those guys” that you work in the same place, but don’t really know what to do with.  Even if you have not worked in a restaurant, these characters are still very relatable.”

Make your reservations now for this comic treat and see how the story unfolds, maybe in the end we will all get our “just desserts!”

Flaming Idiots is directed by SARA DESOTO  and LAURA VOHS as Assistant Director with Technical Direction by ERIC NELSON. The production features Scenic Designs by ERIC NELSON With SARA DESOTO as Costume Designer with ROBYN CONNER as Stage Manager.

Recommendation: This show is rated PG for some mild adult language

Special events in celebration of FLAMING IDIOTS, include:

The City Of Round Rock, and Round Rock Arts are the Leading Sponsors for FLAMING IDIOTS

Sam Bass Theatre - A non-profit organization, Sam Bass Theatre creates intimate theatre experiences that ignite the imagination, inspire the spirit, and engage the community. The Sam Bass Community Theatre (SBCT) has been offering quality live theater to the Round Rock/Georgetown/Austin area for over thirty five years. Proud to be the first theatre company in Round Rock, SBCT strives to create thought provoking, entertaining, and enchanting live theatre all year long. We respect, value and celebrate the unique attributes, characteristics and perspectives that make each person who they are. We also believe that bringing diverse individuals together allows us to collectively and more effectively contribute to the development of the arts in Central Texas.Sam Bass Theatre’s 2016-2017 Season is sponsored in part, City of Round Rock. 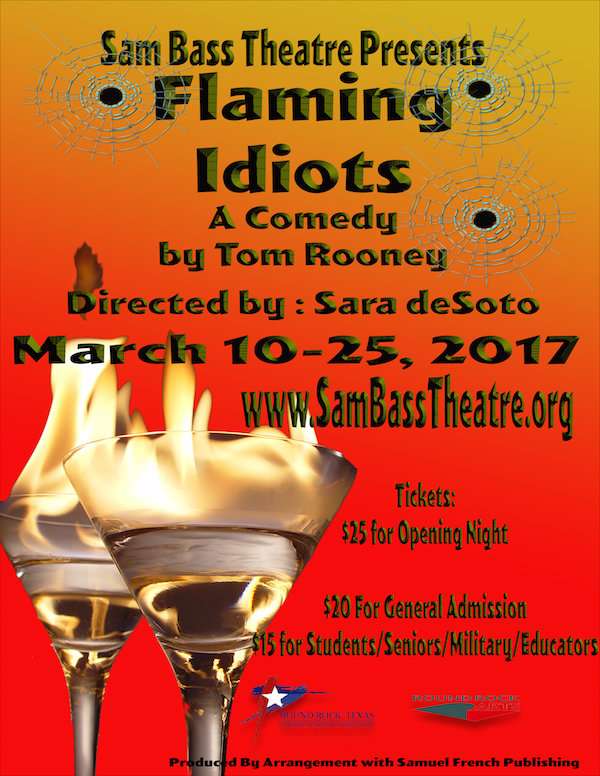