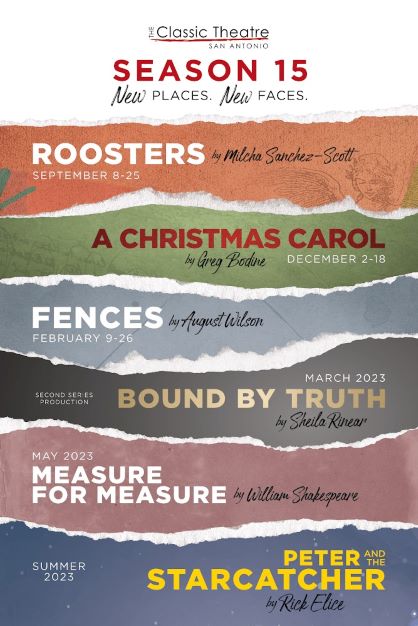 The Classic Theatre of San Antonio’s upcoming 15th season promises to entertain and delight audiences in an exciting new way, as the award-winning theatre takes the performing arts on the road to a variety of unique - and at times atypical - “theatre locations” across the city. A primary goal is to create a new innovative and accessible theatre experience that will change the way people view and engage with theatre productions in San antonio.

Here is what The Classic Theatre is bringing to theater goers this upcoming season:

Roosters tells the passionate and symbolic story of a family in the American Southwest. The crux of the play is the battle for supremacy between a father, Gallo, who wants to exploit the family's fighting rooster, which his son has been looking after, and Hector, his son, who argues that they should sell the animal and use the proceeds for family needs.

The Classic’s production of Roosters will be held outside at La Zona, Centro San Antonio’s newest outdoor placemaking space in the heart of the Alamo City. Tickets are currently on sale via The Classic’s website, classictheatre.org.

A Christmas Carol recounts the beloved story of Ebenezer Scrooge, an elderly miser who is visited by the ghost of his former business partner Jacob Marley and the spirits of Christmas Past, Present and Yet to Come. Deftly performed by one talented actor at the beautiful and historic Maverick Carter House museum, this lively production is sure to put patrons in the holiday spirit and will feature musical ambiance from some of San Antonio’s most beloved classical music groups.

A Christmas Carol will be showing outdoors at the Maverick Carter House.

The Classic Theatre of San Antonio is proud to partner with The Carver Community Cultural Center to bring a production of August Wilson’s, Fences, to the stage.

An American classic and moving family drama, Fences, is the story of Troy Maxson, a father struggling with the bitterness of the past while supporting his wife and children in 1950s Pittsburgh. This Pulitzer-Prize winning play depicts the evolving Black experience in America and explores what happens when one family’s dreams are deferred.

A one-time-only workshop performance of a new work by local playwright Sheila Reinear. This play tells the story of young Meg Roper, a woman in King Henry VIII’s court. Passion, intrigue, and a matching of wits makes this piece engaging for any history buff. The Classic is proud to present this “Second Series” production to our city featuring local performers and design work from Broadway professionals.

Date and location to be announced.

Measure for Measure, May 2023, Shakespeare in the Park Production

Isabella, a young nun, is asked by a city official, Angelo, to sacrifice her vow of chastity in order to save her imprisoned brother’s life. Measure for Measure is Shakespeare’s most famous “problem play” mixing elements of comedy and extreme drama. This evocative theatre experience continues to ask the viewer to examine what roles women are asked to play in our society.

The Classic is proud to offer this show as San Antonio’s official Shakespeare in the Park experience.

Dates and location to be announced.

Dates and location to be announced.

All for more information to reserve tickets, visit http://www.classictheatre.org/.