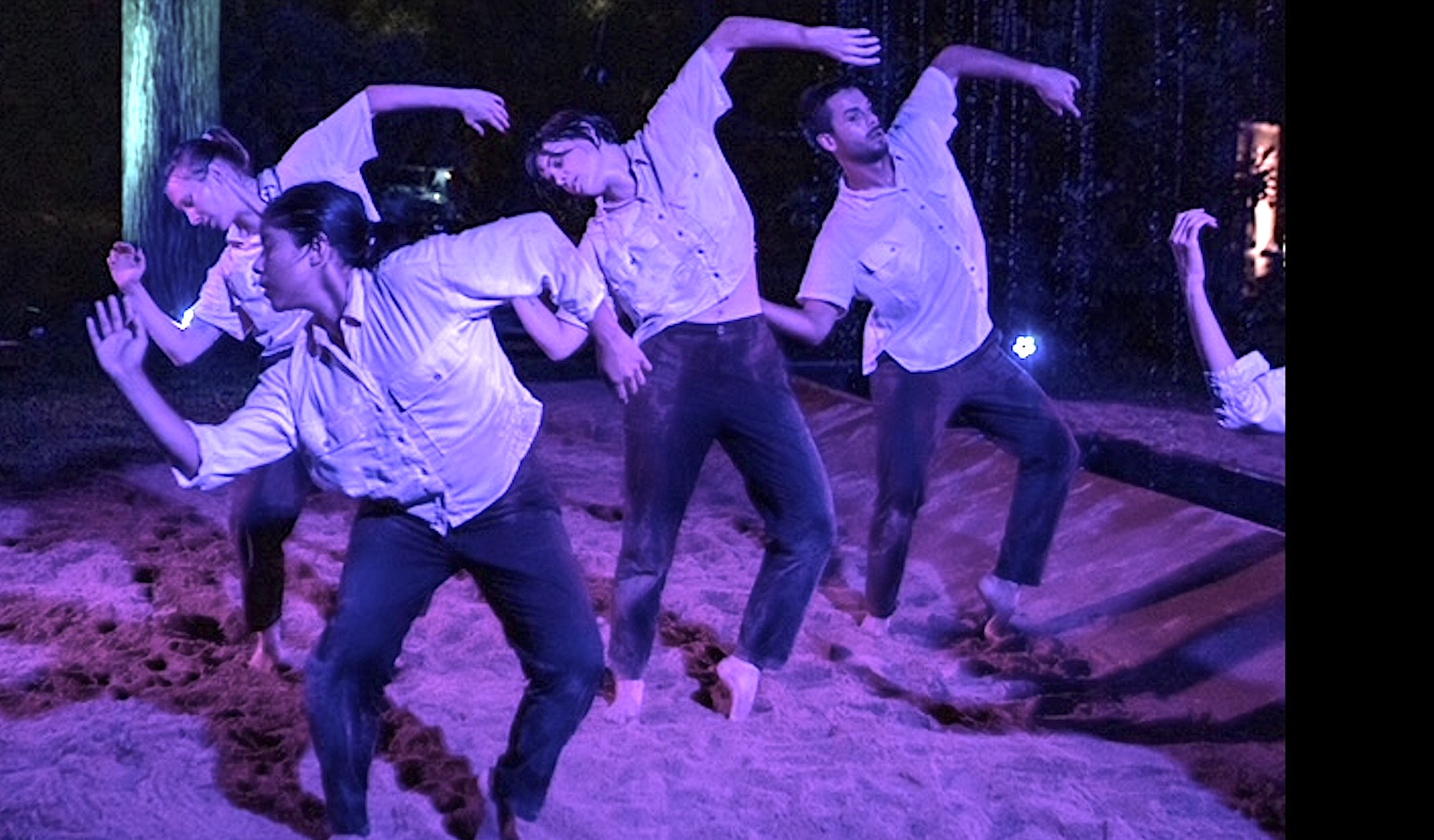 The ensemble expressed gentleness and caring for one other and for a nature being pushed back improvidently by our species—much as was the walnut grove sheltering this space.

Every human being walks through rain with eyes open. That's one of the insights on human suffering and sorrows suggested in Gentle Our Driftless Caravan. And that's why on August 31 it was a great omen of blessing that a huge electrical storm soaked every element of the production and forced a cancellation of the opening performance.   Gentle Our Driftless Caravan hails from the collaboration of En Route Productions, Blipswitch Movement, and Alexa Capareda. … 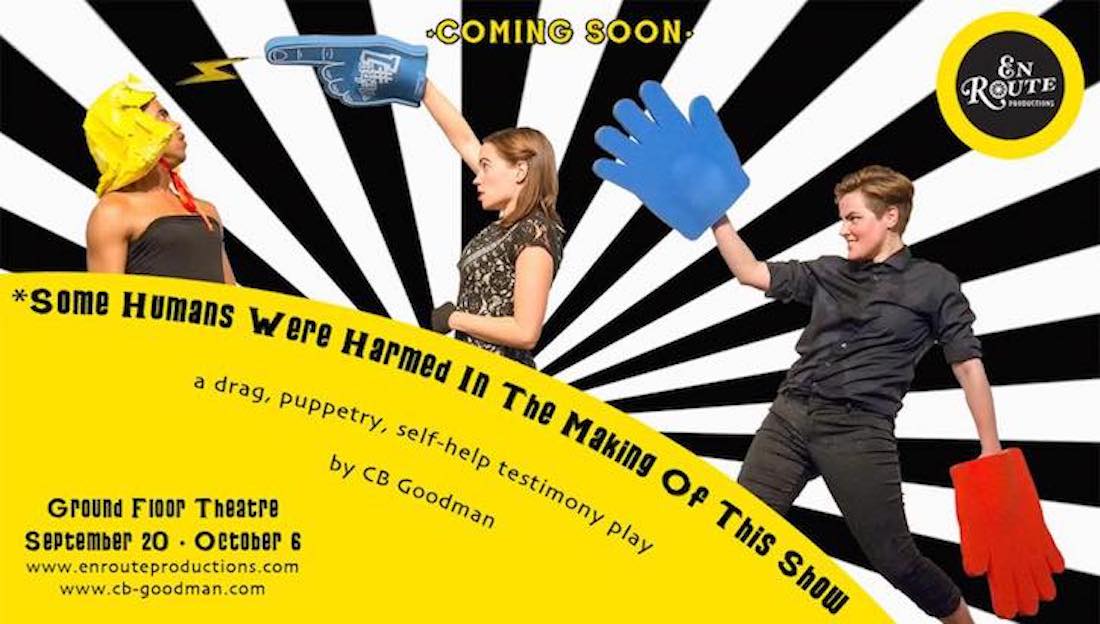 Review: "Some Humans Were Harmed in the Making of this Show" by En Route Productions

The final act of this brilliant piece shifts the tone from farcical to poignant -- jarring, but the pacing is spot on. What began as an absurdist, avant-garde comedy very quickly becomes far more serious and thoughtful, and we’re left feeling regretful for ever having laughed in the first place.

I had no idea what I was getting myself into. I just saw a show that billed itself as a "drag, puppetry, self-help testimony play inspired by the 1903 public execution of Topsy the elephant" and emphatically replied. I didn’t even know who Topsy was. Surely, I thought, good or bad, this show is guaranteed to entertain. Right?   "*some humans were harmed in the making of this show," written by CB Goodman and presented by En Route Productions, … 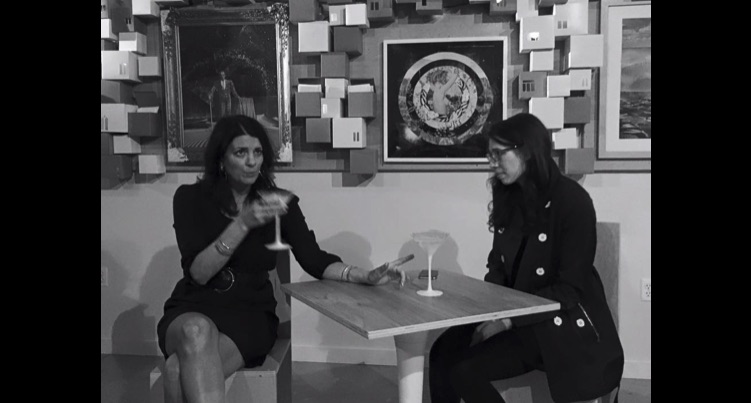 Jean tells whoppers to make the world a better place but she doesn't anticipate the consequences. Trouble is funny, and Sarah Ruhl’s play is an extraordinary example of postmodern comedic absurdism.

The set is a café.  The décor is generally rectilinear, with many sharp lines and planes.  Let’s call it Finnish Modern, because it is designed by Ia Ensterä, Finland’s design gift to Austin.  Ms Ensterä is currently dividing her time between Finland in pursuit of an advanced degree and Austin  for many creative design projects. Her set here is dominated by a wall installation of small brown and white boxes. Some of them have … 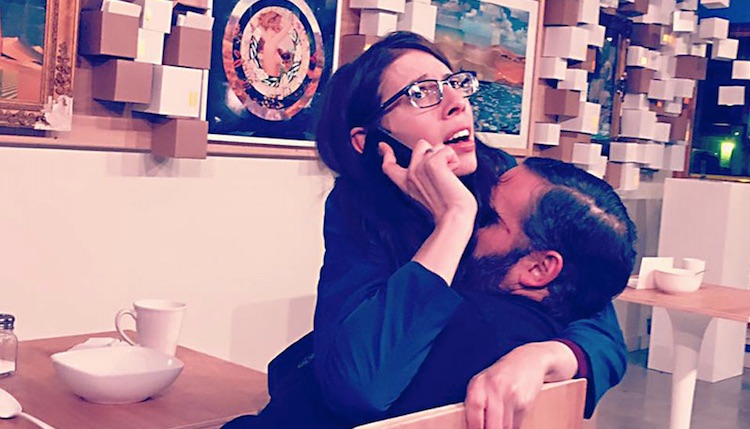 DEAD MAN'S CELL PHONE is a deadpan look at hope and death and the invisible lines that connect us or break, a piece more likely to provoke reflection than hilarity -- and a significant work of theatre art.

It used to be that when you died, you were dead.   Now, not so much. How much of yourself have you invested in Facebook? How much do you want to leave floating in the ether and accessible once death, random but inevitable and invisible, comes calling? The guys at Facebook corporate developed policies for that, by the way, and posted them in 2015.   And if like so many of us today you're … 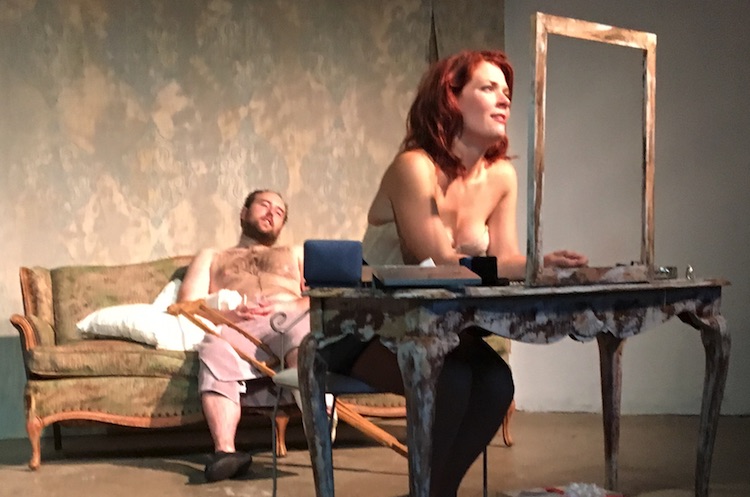 Strong emotion and struggle sweep us up, for the action is taut and compelling throughout. CAT ON A HOT TIN ROOF is a lost world brought to life and made acutely relevant.

Austin's May rains raised more mosquitoes that you'd find in a Louisiana bayou, so En Route Productions ran the first weekend of its subtly powerful Cat on A Hot Tin Roof at the Off Shoot, the Rude Mechs' rehearsal studio in East Austin. That wasn't as difficult as you might think. Tennessee Williams' 1955 Pulitzer Prize winner takes place in a single setting, and C.B. Goodman's simple box set was made to be portable. The production …