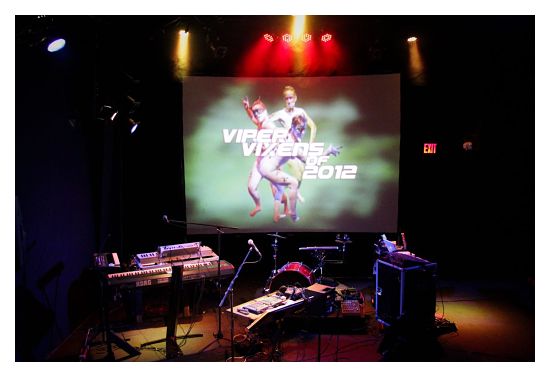 The video runs out before the music does, reverting to more abstract visualizations, and only then, in the last three numbers, does the EPE exert its real talent and reach beyond cheap vaudeville.

The Electronic Planet Ensemble are magic men -- I can say that since percussionist Rachel Fuhrer apparently has disappeared this year, leaving poet David Jewell, keyboardist Chad Salvata and bassist/video artist Sergio R. Samayoa to deliver this piece assisted by drummer Doug Marcis.  I had to identify Marcis from the poster legend, since there was no program available at the Vortex this year. 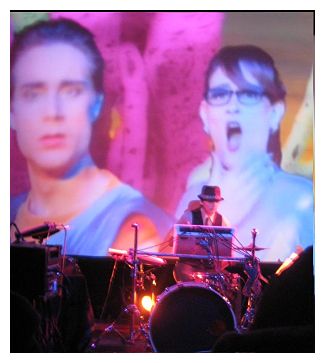 Review: Planet of the Mermaids by Electronic Planet Ensemble

David Jewell's laconic verse and wryly reflective spoken images open your mind up the way a mild dose of psylocbin might do, while your autonomous nervous system grasps that rock 'n' roll sound track.

Electronic Planet Ensemble is the group of Austin cool rockers who invented the "music of the spheres" genre.

Like the earth itself, they come orbiting through the Vortex once a year with another adventure in space and time.  In January 2009 it was Spaceman Dada Robot; in January 2010 it was Surfin' UFO. In October 2009, breaking that pattern with a bit of space-time insouciance, they sailed by in a reprise of their  ... 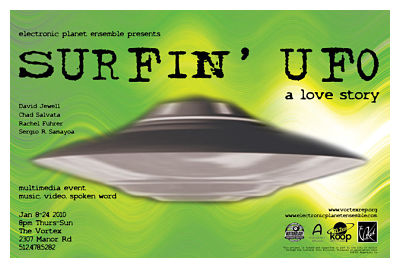 Electronic Planet Ensemble is surfin' big themes on comic book concepts with surfboards and hula hoops, and you have no idea what they're going to do next to your consciousness.

David Jewell's word pictures lift beyond the Vortex space, riding with the waves of music, percussion and video, and the Electronic Planet Ensemble delivers us to someplace exalted and different and yet familiar. They are surfin' big themes on comic book concepts with surfboards and hula hoops, and you have no idea what they're going to do next to your consciousness.Back in the Age of Aquarius this would have been far out, prime ... 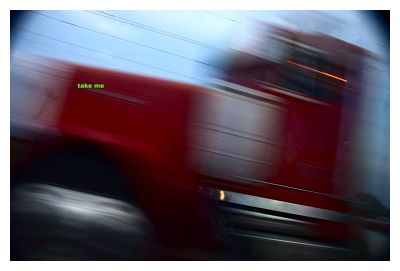 Behind David Jewell and Sergio Samayoa is the screen that flickers with video, kaleidoscopic images and transforming stills, a non-linear dream of transportation as power, elegance, and adventure.

Classic cars of the 1950s float in the collective consciousness of Americans, but as David Jewell gently admonishes us, they'll soon be gone, as distant and vanished as the dinosaurs that enchant our children today.

Jewell is the solo narrator, actor and verbal imager for In.Car.Nation, while Sergio R. Samayoa provides the live soundtrack with computer-synthesizer and guitar. Jewell gives different first-person voices for his unnamed spoken characters, different rhythms, with a ... 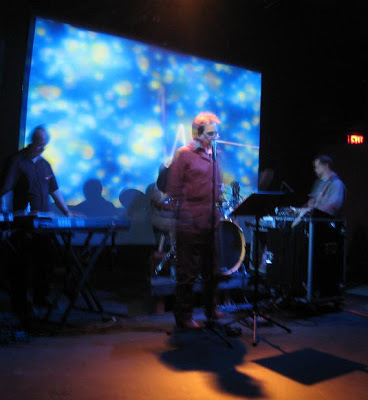 With his verse and in his persona Jewell presents us stories with wildly deadpan humor, a narrator compounded of equal parts David Byrne and Bill Murray.

Electronic Planet Ensemble's Spaceman Dada Robot can move you out of Austin's conventional theatre and out of Austin's club-based music scene. The characters and narrative are in your mind, as in a radio play, and the music is high-energy and percussive, with clouds of chords. Add an hour of images improbable, humorous and awesome, then put David Jewell in front of it.

space travelit gets you out out of the house ... Read more »