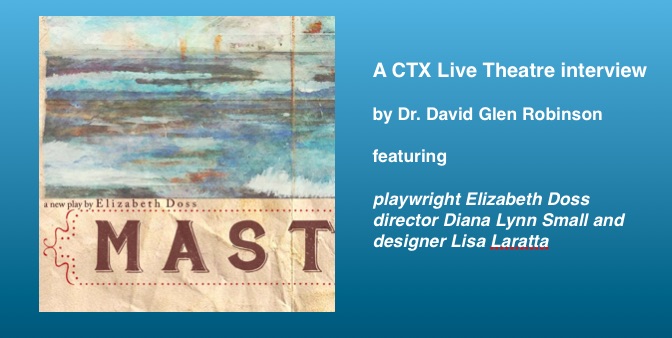 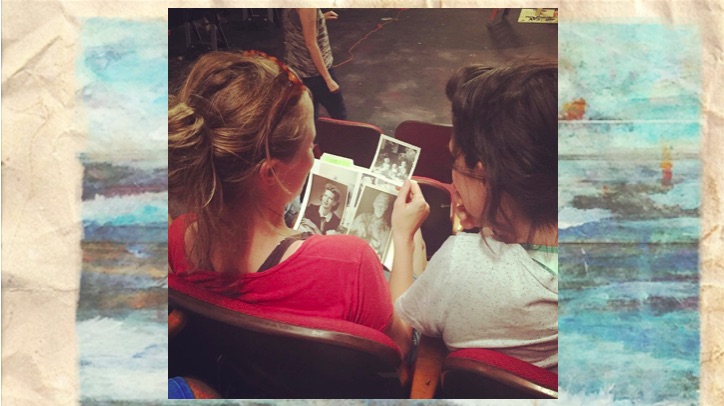 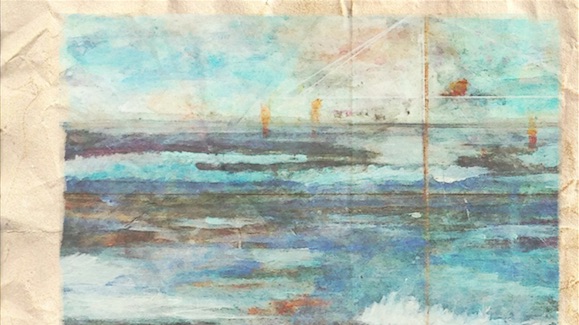 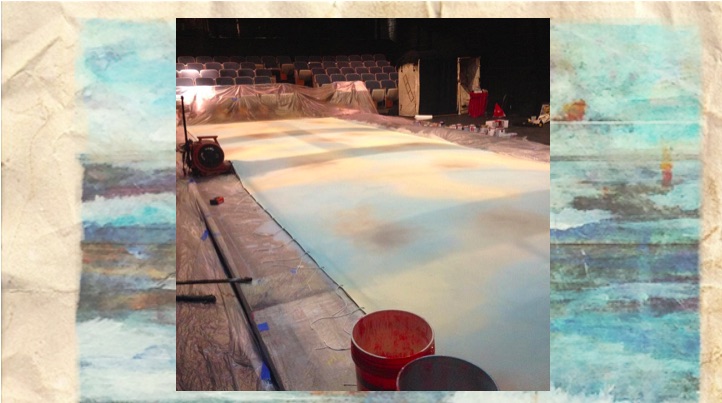 Dr. David Glen Robinson (DGR) of Central Texas Live Theatre interviewed the principals of Paper Chairs theatre company in advance of the premiere of their play, MAST.  The play, from an original script by artistic director Liz Doss, opens July 23rd at Salvage Vanguard Theatre in east Austin.  The production is directed by Diana Lynn Small, with a set designed by Lisa Laratta.  An additional original element in the show is music composed for the production by Mark Stewart and performed live by him on stage at every performance.  As they say at Salvage Vanguard Theatre, “Prepare for impact.”  The show bodes fair to be a highlight of this year’s Austin theatre season.

DGR: Writers gain new insights on the subjects they write about.  Is there one new thing you learned and want us to know about the principal couple in MAST?

Liz Doss: Yes. One of the particular things I learned on MAST is that there is an impulse as a playwright and an impulse in theatre and an impulse in storytelling in general to make your characters likable on some level to the people or audience that you are trying to relate to.  And that’s something you try consciously to craft into your writing: some kind of believability, some kind of relatability.  And particularly what I tried to learn about these character is that, well---Lisa do you remember what you said in the very beginning that “I don’t like Walter and Ann, I don’t like them?”  That incident was pivotal, and after that what I tried to learn about them, what I tried to craft in them, was moments where one empathizes with them just as and where they were in space and their lives.  And that is all versus feeling like oh, they did something that I liked.   Instead it’s like ‘Oh, I’ve had that moment where I felt that trapped or that confused,’ as opposed to, ‘Oh, they did something that’s so cute or that’s so adorable.’  I tried to refrain from making them likable in that way.

DGR: That…is marvelous.  But it’s about the way you wrote it.  And that gives me a question for Diana.  As director, are you relating to that….are you trying to show the interior, positive character of these people or just go on with their actions and statements?

Liz Doss: And that’s what being a human being is. 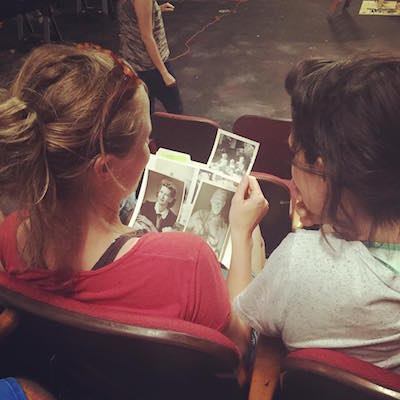 Liz Doss: And the play doesn’t always follow a classic structure where the characters, the protagonists, have a moment of self-realization or self-recognition at the end of the play. I think the characters move closer and closer to a place of contentment with their position.

Diana Lynn Small: Which is like being trapped on the planet.  [laughter] But I think that’s different than like “Oh, I see how I’ve been blind.”  How I am different.  The play is not after redemption.  It is more about people being sexy and honest while also playing games with each other.

Liz Doss: It’s like the main character, Ann, is after what she wants, but what she wants is not happiness.  The thing she has identified for herself is not the American dream; she is not saying “Oh, I’m living because I want to be happy.”  We expect that in our world--well-being--but with her that is not what she is after.

Diana Lynn Small:  The play is very sexy, and it is about people encountering each other, and intimacy, but it is not per se a beautiful romance or a tragic romance.  The characters are not dependent upon the relationship to make their lives meaningful.

Liz Doss:  I think to me a big question is that a lot of times partnership or relationships are ingrained with people.  It is something that we have as a culture that is a value.  We partner in some way with another person…The play explores the question that a lot of people have this thing a lot of people have as a dream or ideal, but for a lot of people this is not a reality. Some people are not wired to give themselves to relationships. But the play also tries to live in that place where characters may be magnetically drawn to one another or to a relationship, but they are equally repelled. And I hope the play does that to the audience as well.

Diana Lynn Small: Yes, I think it does.

DGR: Paper Chairs is famous for its innovative, unpredictable sets.  Lisa Laratta’s poster image is up on the website.  Beyond this, is there an image or a concept you can tell us about the stage set?

Lisa Laratta: I was looking at the play, and, just logistically, there are a number of different locations that we are talking about. We have an army base in Texas, we have an airplane, we have the Dominican Republic, we have a farmhouse in west Texas, east Texas, a beach, and then an apartment in New York. In terms of logistically representing those places but also creating a world that encapsulates all of those places, I wanted to go at it from more of a memory or a dream than a realistic portrayal. So the opening of the play is sort of outside of reality—these two characters floating out in this oceanic purgatory.  And I thought in terms of environment that this was the perfect place for all these things to play out.  So we have this open conceptual space that is the ocean, that is the sky, but it could also be the desert, it could also be a floor, it could be other things--that come together in this sort of piecemeal way—how your memory works.

So out of this conceptual, unrealistic-feeling environment we’re going to carve out very realistic little scenes using real furniture, lighting it in the most naturalistic way we can, carving out these little individual memories that sit together in this completely dreamlike space.

DGR: You’re nodding your head, Diana.  Can you work with that?

Diana Lynn Small: The way I see it is that is in the scenes and the way we jump in time and place. The concept is similar to those times we’ve all had when we open a family photo album, and there are four photos on the album page; it’s the same people but they are in different places: Grand Canyon, living room birthday party, at the pool, the trip to Nicaragua. So you’re seeing the scope of a life, but in a really diverse arrangement of events. That’s what will be happening on stage—different scenes totally dependent on one another, moving furniture from room to room. And also totally changing.

DGR:  Someone reminded me yesterday that Natalie George is lighting this thing. Everything I’ve known of her work is that she can change your world with her lighting sets. And I hope she’s planning on that.

Lisa Laratta:  For sure.  I think she’s going to both utilize the poetic potential of the ocean backdrop, having this glow from behind, having it sort of flattened out from back to front , so really playing up the surrealness of this environment, but also helping us making these rooms feel contained and real.

Lisa Laratta: I think the color palette and the textures, and the composition of that poster, that painting for the poster—well, it was the painting for the set that turned into the poster.  It started out as this idea of Ocean.  And it came from a lot of Anselm Keifer paintings; he does a lot of water pictures. I was interested in his textures, his painterly textures of water. And so I just kind of jammed on that. But I also wanted it to look not at all new. I also wanted it to look sort of like an old map, yes. Which is also why there is some gritty texture in it.

Liz Doss: I think this is why you can say literally and figuratively and physically that this play is all over the map.  And it’s so funny because there are these four people who, for various reasons, end up being all over the world. And we are seeing them in these different places and spaces. In addition, there is El Dictador Trujillo on his own island [editor’s note: the Dominican Republic].

I’ve probably joked with you about this, but in my writing I’m interested in this idea of surregionalism, this idea that particular regions and places evoke or elicit this feeling of their own language, their own vocabulary, their own vernacular and dialect.  And feeling the peculiarities of a time and place are things that historically Paper Chairs has always been interested in.  Taking them and looking at them. 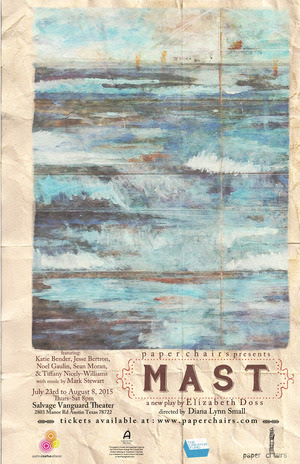