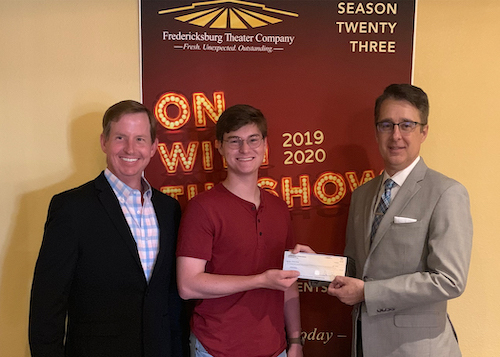 The board and staff of the Fredericksburg Theater Company have named 2019 Fredericksburg High School graduate Landon Priess as this year’s recipient of the Freddyburg Youth Theater Scholarship. This scholarship is offered annually to a graduating senior that has enrolled in an accredited college or university for the fall semester and is majoring in a fine arts discipline. Scholarship recipients must also have participated in the Freddyburg Youth Theater program or a main stage production at FTC.

Landon will be attending Oklahoma City University in the fall as a Musical Theatre major. Throughout high school, he has participated in the summer theatre workshop with Bob Straus as well as participating in many plays at FTC including Guys and Dolls, Disney’s Beauty and the Beast, You’re A Good Man, Charlie Brown, and this summer’s The Sound of Music. In school, he was involved with UIL academics such as Ready Writing, and he participated in theatre, band, and choir. After college, Landon plans to pursue performing and is thinking about possibly attaining a teaching degree to help keep the culture and love for performance growing.

About the Fredericksburg Theater Company: The mission of the Fredericksburg Theater Company (FTC) is “to provide superior theatrical programs for regional participation which entertain, educate, enrich and inspire.” Formed in 1997 by Jeryl Hoover, the theater has grown to an audience of over 13,000 annually. All performances are held at the Steve W. Shepherd Theater. FTC is a 501(c)3 non-profit organization. It has received statewide recognition from Texas Commission on the Arts, Texas Nonprofit Theatres, as well as grants from various arts endowment organizations. For the last three years (2016 – 2018) FTC has been recognized by BroadwayWorld.com as “The Best Theatre in the San Antonio Region.”