Set in Pittsburgh, Chickens in the Yard explores three days in the life of a family as they grow, stumble, and fall into their future. The play explores what gay identity means for one couple, as they journey from the families that raised them to the family they choose to create together. Director Alice Stanley brings the world to life through innovative storytelling and poetic staging, blurring the line between choreography and theatre.

Paul William Kruse is a playwright, film/video maker, and teaching artist from western Wisconsin. His work flows from his queer identity, Catholic roots, and ever-evolving experience of family. Paul creates stories for and with the people he loves. He is a founding member and resident playwright of Hatch Arts Collective in Pittsburgh, Pennsylvania. Paul often writes collaboratively, drawing from his years of experience as a videographer and documentarian. He is currently a fellow at the Michener Center for Writers at the University of Texas at Austin, where he is pursuing an MFA.

Alice Stanley is a director, playwright, filmmaker, and producer, and a Founder of Cohesion Theatre Company in Baltimore, MD. Alice won Best Director from Baltimore City Paper's Best of Baltimore 2016, The Bad Oracle, and DC Metro Theatre Arts, and received the Mayor's Individual Artist Award. They have had plays produced by many theaters, including The Barter Theater, Kitchen Dog Theater, Cohesion Theatre Company, Fells Point Corner Theater, Interrobang Theatre Company, Strand Theater, Baltimore Shakespeare Factory, Gadfly Theatre Productions, and Rapid Lemon Productions. Most recently, their play The Tiny Banger was produced at Trinity Street Players. They are an MFA Directing Candidate at the University of Texas at Austin.

Chickens in the Yard
by Paul Kruse
Vortex Repertory Theatre

ASL-Interpreted Saturday, May 25 (Free to Deaf/Hard-of-Hearing)

Where: The Outdoor Stage@ The VORTEX

2-for-1 admission: Thursdays and Sundays with donation of 2 cans for SAFE Austin. 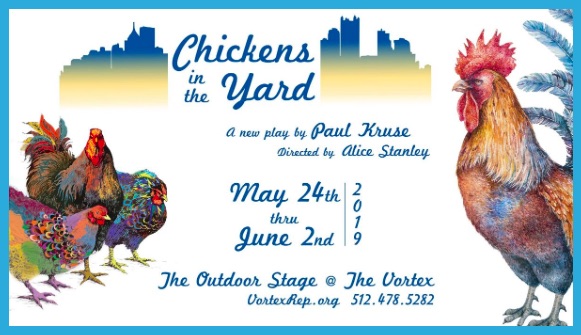