For their upcoming twenty-second season the Fredericksburg Theater Company (FTC) is launching a new initiative to encourage talent throughout the Texas Hill Country to come and audition. On Sunday and Monday, April 15th and 16th at 7:00 p.m. FTC will hold auditions for their summer musical The Music Man. This production is the first of seven shows scheduled for Season 22, which also includes You're A Good Man Charlie Brown, Dial ‘M’ for Murder, Monty Python’s Spamalot and Bus Stop.

For the April 15th and 16th auditions, all directors hired for Season 22 will be on hand to watch.

"We hope to encourage actors from San Antonio, Austin, and the surrounding area to attend the auditions for The Music Man. Right now we have a considerable amount of talent that makes the drive here to Fredericksburg, but we would like to see even more," said Executive Director Steve Reily. "Actors that have worked at FTC have found an experienced staff and extensive volunteer base producing quality work. Our attendance has grown considerably along with our reputation."

Reily believes that more actors will be encouraged to audition for the company based on FTC's new fuel stipend policy.

"We realize the drive can be considerable and that this may have discouraged some performers from auditioning for us in the past. With our new fuel stipend policy, any actors cast from outside a forty-mile radius will be compensated for mileage."

Reily continued, "Of course, we will still have separate auditions for all of our upcoming shows, and those dates are posted now on our website. The only show we have precast is "Winter Wonderettes." Last summer's run of "The Marvelous Wonderettes" was such a smash hit we decided to stay with the same cast and production team."

Another production in late July, Seussical Jr. is a children's show cast with students from FTC's Youth Theater Program, Freddyburg.

Information about the April 15th and 16th auditions for The Music Man and the other four productions open for auditions can be found on the FTC website at fredericksburgtheater.org [and at CTXLiveTheatre.com]. Anyone wanting more details about auditioning for Season 22 may contact Reily via email at fbgtheaterco@verizon.net or by calling the theater office at 888-669-7114.

Reily asks that anyone considering auditioning to go to their website to learn more about the theater.

"We have plenty of photos and videos of past productions on our website. You can also go to our homepage and take a virtual tour of the facility. I encourage everyone to investigate FTC. I think anyone that looks into it will find that we are doing some incredible work."

As Reily notes, over the last five years attendance at FTC has increased 33% with many of performances selling out. The majority of this audience is coming from out of town too. On average 62% of FTC's audience is from outside Gillespie county with over 13,000 in attendance every season.

Fredericksburg Theater Company to Hold Auditions for The Music Man

Auditions for FTC’s summer musical The Music Man are scheduled for Sunday and Monday, April 15th and 16th, at 7:00 pm at the Steve W. Shepherd Theater, located at 1668 South U.S Highway 87 in Fredericksburg. All roles are available for auditions. Please prepare one musical theater song that best showcases your vocal talent and is no more than 32 measures in length. Please have your audition piece memorized. An accompanist, CD player, and the ability to play mp3 tracks will be available. Please be prepared to sing with an accompanist or a backing track. Please, no a cappella auditions.

If you are interested only in a chorus role, there will be a brief group audition using one of the chorus songs from The Music Man. Those seeking a principal role must sing a prepared solo musical selection. There will also be a brief dance audition and cold readings from the script directly after the singing auditions. FTC is looking to cast around 40 performers for their Season 22 opener including children ages 5 and up. Children interested in the roles of Amaryllis and Winthrop will need to pick up audition material at the FTC office. The materials include music and a reading selection. If cast, attendance to technical week rehearsals for The Music Man, June 11th – 17th is mandatory, as well as attendance at all performances. Performance dates are Fridays, Saturdays and Sundays June 15th – July 1st.  If you have further questions, please call Executive Director Steve Reily at 888-669-7114.

Funny, warm, romantic and touching, The Music Man is family entertainment at its best. Meredith Willson's six-time Tony Award-winning musical comedy has been entertaining audiences since 1957 and is a family-friendly story to be shared with every generation. 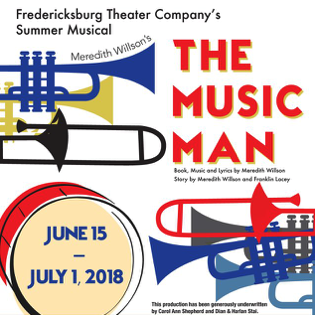